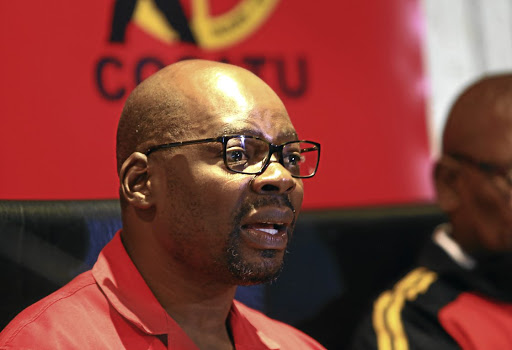 Speaking to hundreds of National Education, Health and Allied Workers Union (Nehawu) members at a policy conference in Boksburg, on the East Rand, yesterday, Mapaila warned Mkhwebane not to become the "hired gun" of the fightback agenda within the ANC.

"She must remain respectful of that office so that its judgment can enjoy the legitimacy of our people, not just the law.

"At the same time, we are worried that the rogue intelligence units are having a strong influence on this office in trying to destabilise our country... even in trying to reject the outcomes of Nasrec [ANC elective conference]."

He said Mkhwebane should be wary of pursuing "comrades on the basis of information that she is allegedly fed by rogue intelligence units".

Busi Mkhwebane will not apologise for 'rogue unit' remarks: 'It boggles the mind'

Public protector Busisiwe Mkhwebane will not apologise for statements she is accused of making about former Sars officials Ivan Pillay and Johann van ...
News
2 years ago

"That office must be led with absolute care, it should not be factionalised. Once you use it as an instrument of factions in the movement, its legitimacy will be waned and we don't really want to go there, where the office is no longer appreciated.

Earlier this month, Mkhwebane said public enterprises minister and ANC national executive committee member Pravin Gordhan had been implicated in her investigation into the rogue unit at the South Africa Revenue Services.

In May, Mkhwebane had issued Gordhan with a section 7(9) notice about many complaints lodged against him by the EFF, who in recent weeks have come to the defence of the public protector.

Days after Mkhwebane announced the investigation, Gordhan claimed that the timing of Mkhwebane's report was "suspicious", "politically motivated" and enabled "a renewal of the ongoing political campaign against me by proponents of state capture and defenders of corruption".

Mapaila said the SACP would not sit back and watch Gordhan being attacked on the basis of "rogue intelligence units".

Nehawu is holding its policy conference to decide on its approach to government's plans.

The African Transformation Movement has leapt to the defence of Public Protector Busisiwe Mkhwebane and rejected calls for her to be removed from ...
News
2 years ago

Mkhwebane 'has right to investigate further'
News
2 years ago

The presidency confirmed on Friday that President Cyril Ramaphosa had been given an extension to respond to public protector Busisiwe Mkhwebane's ...
News
2 years ago
Next Article