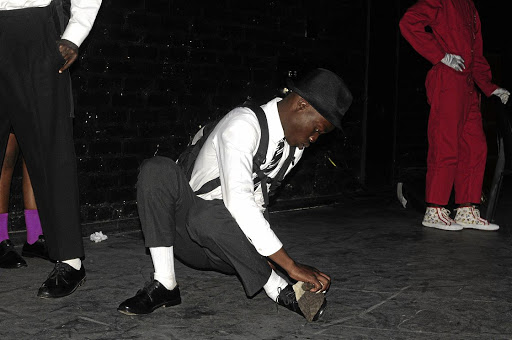 A pantsula dancer making sure his shoes are shining before going on stage. Patsulas are masters of show-off, they are also very particular with what they wear and how they look. /Thulani Mbele.

I was at a shisanyama when the TV screen suddenly came alive with members of the EFF staging a raucous walk-out from the National Assembly just as Pravin Gordhan was about to speak.

Some of my fellow meat-eaters laughed and cheered the Red Berets. But one voice of dissent came from a man I hadn't noticed earlier.

He said in isiZulu: "I used to admire the EFF guys for their courage. But it's enough. You don't have to be consistently rude to make your point. Now they need a serious beating."

The man used a specific word for "beating" - isibhaxu. This is no run-of-the-mill beating. Only in the certain rural areas will you get isibhaxu. Which is to say isibhaxu has a rural intonation, if a beating can have an accent.

The man's voice betrayed a seriousness that forced me to turn around and look at him. I had to stop myself from bursting out in laughter. The man was a species from another era.

Typical Joburg darkies always tell us that if you're not from Jozi, you can't be a proper pantsula.

They should have seen this guy. He was pantsula from head to toe. Surely a pantsula of a certain kind and era.

Coming from KwaZulu-Natal and having gone to school with pantsulas of the 1980s, I was startled that in this day and age, there was still someone walking around proudly wearing Brentwood pants (rusty brown in colour), light-brown Opela sandals and a knock-off Viyella shirt (red and black check). It was as if we'd gone back in time.

When he noticed eyes were on him, he smiled. Well, to the uninitiated it looked as if he was smiling, but he was not. He contorted his face in a certain way, the better way to show off his gold tooth. I kid you not.

I suppose every corner of SA has its own variety of a pantsula, in different stages of development and evolution.

But in some parts of KZN they honour tradition. If something works, they don't want it changed or replaced.

A little bird tells me that at some stage, the makers of Opela sandals wanted to phase out the sandal and replace it with something new, fashionable and chic.

President Cyril Ramaphosa poked fun at EFF leader Julius Malema while applauding BET Award winner Sho Madjozi during his reply to the debate on the ...
News
2 years ago

News of the impending phasing-out leaked and a strong contingent of KZN pantsulas embarked on a protest march down Victoria and Grey streets in Durban, which are home to stores that stock these time-tested items.

No, I haven't made a mistake by saying "opera" and "blentwood" in the afore-going paragraph. You see, in KZN r's and l's get mixed up a lot. Fred becomes Fled; and Blade becomes Brade, Ramaphosa is Lamaphosa, and so on.

Anyway, startled by this protest, manufacturers relented and went back to producing the Brentwood.

When I mentioned this to a friend, he said: "You clearly haven't been to a taxi rank lately. Brentwood and Opela sandals are still the rage there, and at hostels too."

In Eastern Cape, they are not lagging behind in the preservation of this variety of pantsula, who is brand loyal.

Not these lightweight Soweto pantsulas who change styles yearly. In Eastern Cape, in addition to Brentwood, they wear "luther" jackets and caps. "Luther" is township speak for imitation leather.

When KZN pantsulas say EFF guys have overplayed their hand, I agree. Enough with the theatrics, Jujuboy. When you see our gold teeth glinting, it's not because we're smiling. We mean business.

'Spare us trouble of coalitions, ensure ANC wins in 2019'- Masina

Masina survived the motion through the help of the IFP which abstained from the voting and the EFF which did not support the motion.
News
3 years ago
Next Article