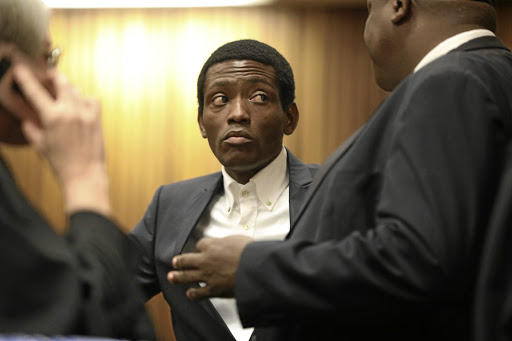 Controversial taxi boss Vusi Mathibela has approached the high court to allow his family to provide him with food as he 'fears' for his life./ Thulani Mbele

Mamelodi's feared taxi boss Vusi "Khekhe" Mathibela is refusing to eat food prepared in jail, claiming that there is a conspiracy to poison him.

The allegation was made in the North Gauteng High Court in Pretoria yesterday, where Mathibela, 32, along with Sipho Patrick Hudla, 36, Matamela Robert Mutapa, 42, and Bonginkosi Paul Khumalo, 38, stand accused of murdering North West businessman Wandile Bozwana in 2015.

Bozwana and his partner were gunned down in October of that year when they stopped their car at the Garsfontein off-ramp, in eastern Pretoria. Bozwana died while Mpho Baloyi was hurt but survived.

Mathibela instructed his lawyer, advocate Gerhard Botha, to ask Judge Jonas Mosopa to allow his family to bring him food as he fears for his life.

"My client said he fears for his life because there was an attempt at food poisoning and he refuses to eat the food provided to him," Botha said. "He further instructed me that the captain in the holdings cells [of the court] refuses to allow his family to give him food."

Mosopa responded by telling Botha that the issue was beyond his jurisdiction as an officer of the court, and that they would have to refer their complaint to the department of justice and correctional services or the police.

The Bozwana murder trial, which was expected to start this week, has seen a trial-within-a-trial which aimed to dissect the methods employed by the police in obtaining confessions from Hudla, Mutapa and Khumalo.

Khumalo's legal representative advocate Peet Johnson cross-examined Capt Angel Nonkululeko Mthethwa regarding the methods used to obtain a statement which implicated him in Bozwana's murder. Johnson put it to Mthethwa that she flouted the procedure of obtaining a statement from Khumalo and that he was assaulted in the process.

Johnson further put it to Mthethwa that she failed to explain Khumalo's rights to him during the arrest and that he was assaulted.

"My client had a plastic bag pulled over his head and it was tightened, then water was poured in it and he was suffocating. In the process he was injured on his forearm, wrists and his neck. My client said [a] Xulu and Dube took part in the assault at a boardroom in Aeroton."

However, Mthethwa responded by saying that she was the only person present during the interview and that she was not aware of Khumalo being assaulted and that she was able to read out his rights to him when she effected the arrest and explained to him the implications of making a statement.