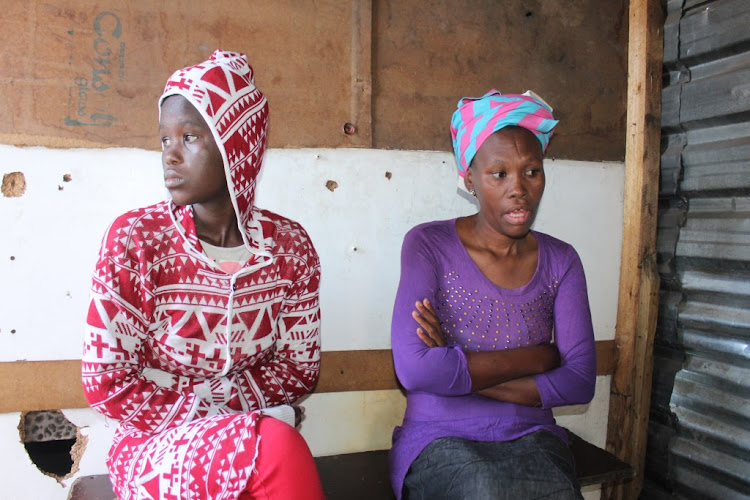 Sixteen-year-old Akhona Mncedane (left) lost her four-month-old baby after teargas was fired during a protest in Philippi this week. Her mother Thandiwe says they don't have money to bury the child.
Image: Velani Ludidi / GroundUp

An inquest has been ordered into the death of a four-month-old baby after teargas was fired by police during protests in Marikana in Philippi, Cape Town, on Monday.

Akhona Mncedane, 16, says she and her baby, Alunamda, were inside their home when police were forcing protesters back into the settlement using rubber bullets and teargas.

“The child was sleeping and we were watching her. I started coughing due to something strong that I was inhaling. The child started crying and after that it was silence,” she said.

An ANC member from the Western Cape was killed in a "multiple vehicle accident" after reportedly trying to do a U-turn to evade violent protest ...
News
2 years ago

The child’s grandmother, Thandiwe Mncedane, said she knew something was wrong when Alunamda stopped moving. She said they are unemployed and do not know how they will bury the child.

“I have two children other than Akhona who are younger and we are poor,” she said.

Two young men appeared briefly in camera in the Athlone Magistrate’s Court on Monday in connection with the murder of 20-year-old Gift of the Givers ...
News
3 years ago

Moses Dlamini of the Independent Police Investigative Directorate said Ipid had not received any report about the death of the baby.

Police spokesperson Captain Frederick van Wyk said: “An inquest case was registered for investigation following the death of four-month-old baby in Marikana on Monday June 24. A post-mortem will be conducted to determine the cause of death.”

During Monday’s protests, vehicles were torched and police used teargas, which spread through the settlement. Residents, including children, were forced to flee their homes.

President Cyril Ramaphosa has proposed an effective model that will ensure rapid service delivery by municipalities across the country.
News
2 years ago

The ANC in the Western Cape expressed shock after ANC member Andiswa Ndevu died in a car accident while trying to evade the protest on the corner of Lansdowne Road and Symphony Way.

ANC Western Cape provincial secretary Faiez Jacobs said a car in front of Ndevu’s had been stoned and when she tried to make a u-turn another vehicle had driven into hers.

“We express our condolences with her family and call on our communities to refrain from taking their frustrations and anger out on motorists. There are other more peaceful ways to protest,” he said.

A police statement said that at about 8pm, a 30-year-old woman and a man were fatally injured between Symphony Way and Govan Mbeki Road in Philippi East.

“According to reports, the woman was in one of three vehicles involved in the accident, when they were trying to get away from people throwing stones.

“In the Philippi East policing area, eight vehicles were burnt,” said Van Wyk in the statement.

'She did not win during the nomination of councillor candidates' ANC members in Philippi, Cape Town, on Monday night blocked Lansdowne Road with ...
News
10 years ago

Community leader Xolani Tukwayo said leaders had told residents at a meeting that protests would be stopped in order to deal with the baby’s death, but the residents decided otherwise.

“They accused us of selling out and went on the N2 to start protesting,” he said.

Tukwayo said the people were tired of empty promises. “It is out of our hands now. We are meeting with the police to tell them that more protests are coming.”

Among residents’ demands are more streetlights. In some places residents have installed their own street lights to reduce crime in the area, said Tukwayo.

A lawyer who represented the families of the mineworkers killed during wage-related unrest at Lonmin’s platinum mine in Marikana‚ North West‚ in ...
News
3 years ago

Attacks on women and children, cash-in-transit heists, destruction of public property have become the norm.
Opinion
3 years ago
Next Article