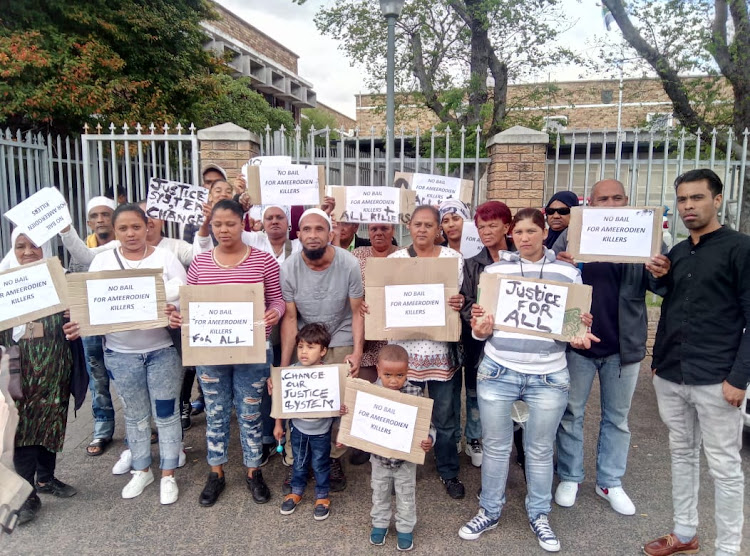 Hannover Park community members protest outside court on Monday where two men appeared for the murder of Gift of the Givers volunteer.
Image: Aron Hyman

Two young men appeared briefly in camera in the Athlone Magistrate’s Court on Monday in connection with the murder of 20-year-old Gift of the Givers volunteer Ameerodien Noordien.

Noordien was gunned down in his gang-ridden community of Hanover Park by two alleged gang members.

One of the suspects is 17-years-old and cannot be named. The second suspect is Adrian Carelse‚ 21.

Noordien was killed the day after returning from work where he helped to load water for a relief effort in Beaufort West.

Noordien was recruited by Ali Sablay along with nine other young men from his area to help Gift of the Givers to deliver animal fodder‚ water‚ and other humanitarian aid to dozens of farming communities in the Western Cape‚ Eastern Cape‚ and Northern Cape.

Gift of the Givers drought relief coordinator Hester Oppermeyer said Noordien’s team had helped to provide a last lifeline to hundreds of farmers whose cash reserves had been depleted making it difficult for them to buy animal feed.

The case against Carelse and the 17-year-old was postponed until November 15. Neither suspects applied for bail.

Western Cape police said Carelse had handed himself over to Philippi police after a manhunt was launched for him by a newly established anti-gang unit” which police minister Bheki Cele had vowed to launch in Hanover Park by the end of this month.

Police spokesperson Brigadier Novela Potelwa said that operations by the unit in Hanover Park had led to the arrest of the second suspect in Athburg Walk‚ Hanover Park‚ on Saturday.

“Anti-Gang Unit members hit the ground running this week when they were deployed in areas such as Hanover Park‚ Lavender Hill and Bonteheuwel in an intervention to fight gang violence and its manifestations‚” said Potelwa.

“The deployments of the multi-disciplinary team comprising Tactical Response Team‚ National Intervention Unit members as well as detectives follow an announcement by the Minister of Police‚ Mr Bheki Cele‚ that the Anti-Gang Unit would be established in response to anti-gang protest incidents across Cape Town‚” she said.

Community members joined Noordien’s father Mohamat at the court where the family members of the 17-year-old were also present.

They told SowetanLIVE that since Cele’s visit last week there had been an increase in policing in the area which had led to a dramatic drop in shootings between gangs although there were still incidents.

They said that some police members were brazenly seen accepting bribes from drug merchants‚ and although the incidents had been reported to the police‚ the practice continued.