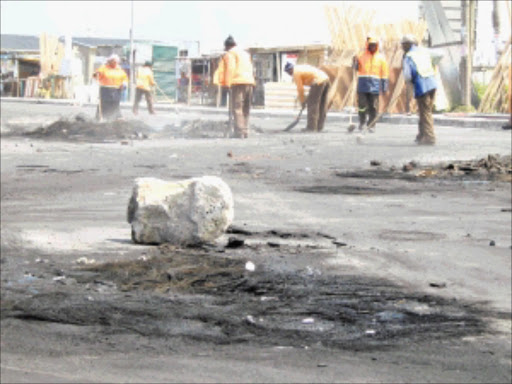 A FOUR-WEEK service delivery protest in Khayelitsha, Cape Town, has spread to Philippi, with hundreds of residents barricading busy roads with burning tyres over the weekend.

The protest was set to continue last night, according to Eric Notana, chairperson of the Philippi People's Forum.

"We will continue until Plato (Cape Town mayor Dan) agrees to meet us. He must deliver positive answers," Notana said.

Last month the organisation handed over a memorandum to a city representative in which they complained that they had not been told of any plans to build houses for them.

Mabhuti Nkwenkwana, 49, said he was one of the first people to set up home in the area (Kosovo) 13 years ago.

"How long are we going to stay in shacks? We share our groceries with rats. Some of us have TB and pneumonia because these shacks are very cold," Nkwenkwana said.

Backyard dweller Nomtha-ndazo Mfengu is willing to be moved anywhere as long as she gets a decent house.

"If you come from town with food parcels the landlord gets cross. You have to bribe her by giving her some of the food," Mfengu said.

The city had promised to respond to the residents' memorandum by October 21. Plato's spokesperson Rulleska Singh told Sowetan yesterday that the mayor had replied to the memorandum.