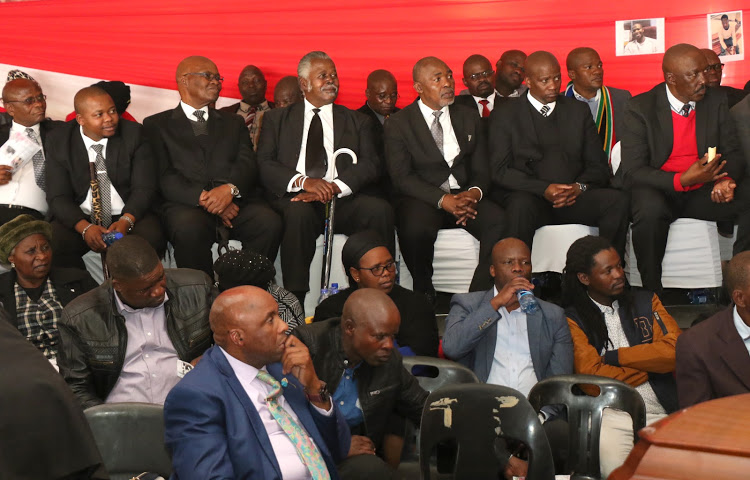 Senior members and elders during the funeral of two young AbaThembu royals, Nzululwazi Mnqanqeni and his younger brother, Aloyisa Mnqanqeni. They were killed in a car crash.
Image: LULAMILE FENI/DispatchLIVE

Senior members of the Madiba clan were joined by about 1,000 mourners to comfort Moshi Traditional Council head Nkosi Zululiyazongoma Mnqanqeni and his wife, Nomzi Mnqanqeni, at the funeral of their two sons following a car crash.

Nzululwazi was a pharmacist at St Patrick’s Hospital in Mbizana, while Aloyiso was a computer science and IT student at the University of KwaZulu-Natal.

The brothers were involved in a car accident on the N2 between EmaXesibeni and KwaBhaca on June 16. Their car collided with a truck.

Two people they were travelling with also died in the new car, which Nzulululwazi was driving home to show his parents.

'Childish' Mandela offspring must get matric, not talk out of turn: Mandla

Paying tribute to the two princes, Dalindyebo said the Mnqanqeni family had embraced Nelson Mandela’s dream that all royals and their children be educated.

“While youth out there are so concerned with drugs, alcohol and crime, fortunately your sons chose education. They died not doing crime, but going home to share their joy and achievements with their parents. That is why we have agreed that they get a send-off of this magnitude, befitting royalty,” said Dalindyebo.

He said although South Africa had attained freedom 25 years ago, black people were still not liberated economically. “The economy and wealth of this country is still in the hands of the white people. It is only when our youth equip themselves educationally and with the necessary skills that we can be liberated economically,” said Dalindyebo.

The acting king, 26, is a final-year BA communication student at the University of the Free State.

He urged young people to be patriotic and take pride in all the cultures and customs of African people.

Nelson Mandela's great-grandson Mayibuye Mandela told SowetanLIVE's sister publication TimesLIVE that he would put a cross next to the BLF in the ...
News
2 years ago