'Childish' Mandela offspring must get matric, not talk out of turn: Mandla 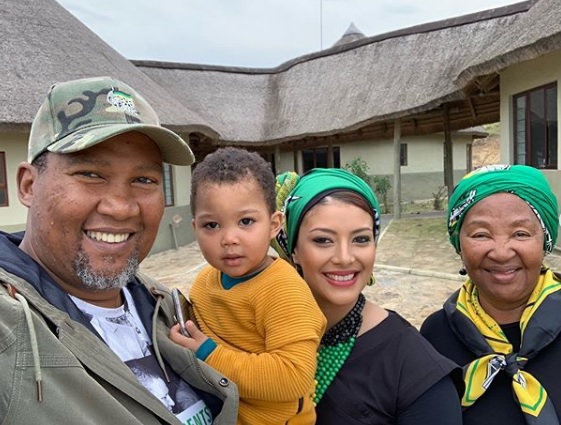 Mandla Mandela shared this photograph of himself and his family voting in ANC regalia in Mvezo. With him are his wife Nkosikazi Nosekeni Rabia Mandela and their son Mandela Mandela, who has just turned two, and Mandla's mother Nkosikazi Nolusapho Mandela.
Image: nkosizwelivelile via Instagram

Nelson Mandela’s grandson, Mandla Mandela, has apologised to AbaThembu acting king Azenathi Dalindyebo and his family after Madiba’s great grandson, Mayibuye Mandela, threatened to break family tradition and split his vote in the May 2019 general election.

Mayibuye, 26, told SowetanLIVE's sister publication TimesLIVE ahead of the May 8 vote that he wanted to cast his ballot for the Black First Land First organisation in the Western Cape and only vote ANC nationally.

“He must go study, finish his matric then go to university.”

The Xhosa royal family thanked Mandela, a senior traditional leader in the Eastern Cape, for his position.

Nelson Mandela's great-grandson Mayibuye Mandela told SowetanLIVE's sister publication TimesLIVE that he would put a cross next to the BLF in the ...
News
3 years ago

Mayibuye, who used to stay with Mandla in Mvezo where he was doing matric at the Nelson Mandela School of Technology in Mvezo, supports the release from prison of Azenathi’s father, king Buyelekhaya Dalindyebo.

Dalindyebo is serving an effective 12-year prison term imposed by the Supreme Court of Appeal in 2015. The jail time was handed down for three counts of arson, three counts of assault with intent to do grievous bodily harm, one count of defeating the ends of justice, and one count of kidnapping.

The king set fire to dwellings that housed three complainants — who were his “subjects” and tenants — to secure their eviction when he believed they had breached tribal rules.

The king was also alleged to have publicly assaulted three young men so brutally that, had it not been for later medical intervention, they might very well have died.