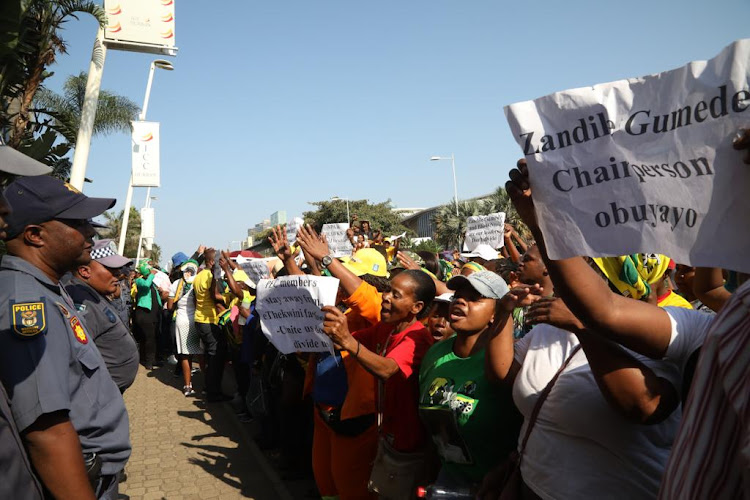 Demonstrators have given the leadership of the ANC in KZN until Monday to receive their memorandum.

About 1,000 party members marched to the party's provincial office in central Durban on Friday to hand over a memorandum to ANC provincial chair Sihle Zikalala. However, the leader, who is the premier designate, was not present and the demonstrators refused to hand it over to any other ANC representative.

"We are giving leadership till Monday to reach out to us for the memorandum or else we will do more than this," said ANC member Sifiso Ngcobo.

The marchers brought roads to a standstill as they made their way to the provincial offices singing songs in support of eThekwini mayor Zandile Gumede and carrying placards that accused police minister Bheki Cele and youth league provincial secretary Thanduxolo Sabela of creating factions within the province.

"Alliance of Bheki Cele and Thanduxolo self-serving using the hawks" and "Thanduxolo is moving from one faction to the other he just wants money nothing else," were some of the placards carried.

Members of the SAPS and Metro posted outside the ANC Provincial offices as #ZandileGumede supports arrive @TimesLIVE @yasantha pic.twitter.com/j2PmVjf5tK

Gumede appeared at the Durban Specialised Commercial Crimes Court on Tuesday on charges of unduly influencing the awarding of a tender of Some of the demonstrators denied that they were marching in support of Gumede.

"I cannot speak on what is written on people's placards because it is their opinion. We are not here to support anyone in particular. We are activists by nature," said Mzomuhle Dube.