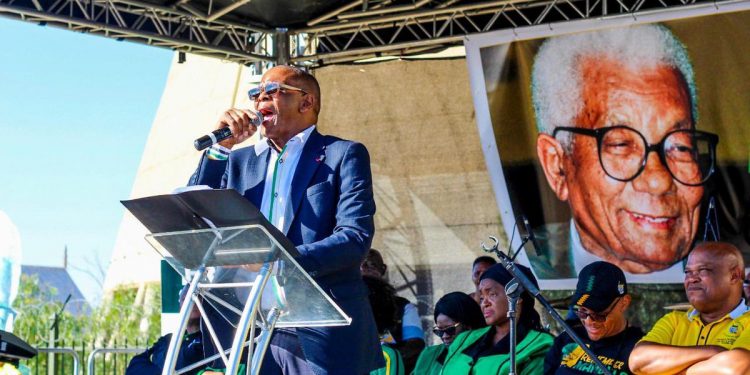 ANC secretary general Ace Magashule spoke at the annual Walter Sisulu memorial lecture in Bloemfontein on Saturday, addressing the recent elections, the legacy of party stalwarts and the fight against 'white monopoly capital'.

“Black people must participate in the mainstream of the economy and that struggle is going to continue. And I hope those who are going into Parliament, those who are getting into government, will remember where we come from and will never forget our roots. The likes of Walter Sisulu inspired and agitated us and activated us to be where we are, so the struggle continues.”

“Our people demand service delivery, sustainable jobs, efficient health services and an accountable government. Their hope still lays with the ANC, which dare not to betray them. The people were refusing to be subtenants and squatters in the land of their birth. This was the current challenge, to better the quality of life of the people.”

“We cannot allow a few of us to be co-opted into the power structure of the (mainly white) rich, while many – indeed black people and African people – still remain poor. We cannot defeat "white monopoly capital" by allowing it to co-opt us.”

This could be in reference to when Magashule scoffed at Fikile Mbalula's suggestion that Cyril Ramaphosa had renewed hope in the party during the general elections.

Address by the SG of the ANC Cde Ace Magashule during the occasion of a memorial lecture dedicated to the life and times of the late stalwart & former ANC SG #TataWalterSisulu held at the Waaihoek Methodist Church in Bloemfontein, Free State. pic.twitter.com/zTylnjd8VX