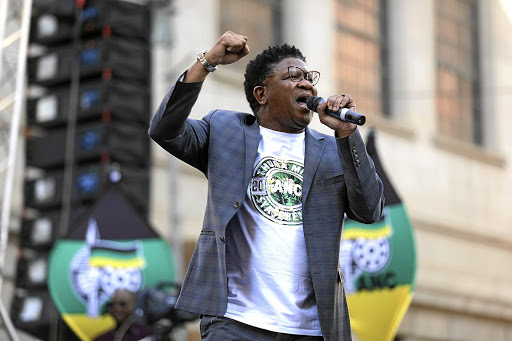 Fikile Mbalula's remarks that the ANC would have lost this year's elections had President Cyril Ramaphosa not emerged victorious at the ANC's elective conference at Nasrec in 2017 are divisive.

This is the view of minister in the presidency Nkosazana Dlamini-Zuma, who lost to Ramaphosa at the conference.

Mbalula, who headed the ANC's elections campaign, said that by electing Ramaphosa as its president, the party averted a disastrous performance at polls, which he said could have seen the party drop to 40% as opposed to the 57% it managed to gain.

Dlamini-Zuma said she could not fathom why Mbalula insisted on talking about Ramaphosa's victory at Nasrec.

"Yes [the comments are divisive], if you keep raising issues around Nasrec that's divisive, isn't it? Because Nasrec was a point in time, why do we keep going back to it? To what end?

"How does it help advance the ANC?" asked Dlamini- Zuma.

Divisions in the ANC have once again played themselves out in open after the ANCYL in the Free State launched a scathing attack on ANC head of ...
News
2 years ago

"The ANC would be where it is today. People have voted the ANC. People are not voting any person," said Magashule.

ANC national executive committee member and minister of international relations and co-operation Lindiwe Sisulu said the party was a conveyor belt and individuals could not be isolated.

"You've never asked in the past [whether] it was because of [Jacob] Zuma, is it because of Madiba's face?

"We would like for you to look at it holistically because when you begin to desegregate you [are] sowing kind of divisions in the ANC which [are not there] and should not be there," said Sisulu.

Mbalula stood his ground, saying Ramaphosa was a game-changer.

Another ANC leader, who spoke to Sowetan on condition of anonymity, said Mbalula was correct and that he was being kind when he said the ANC would have dropped to 40% nationally.