ANC NEC will discuss who to appoint as premiers not election results: Ace Magashule 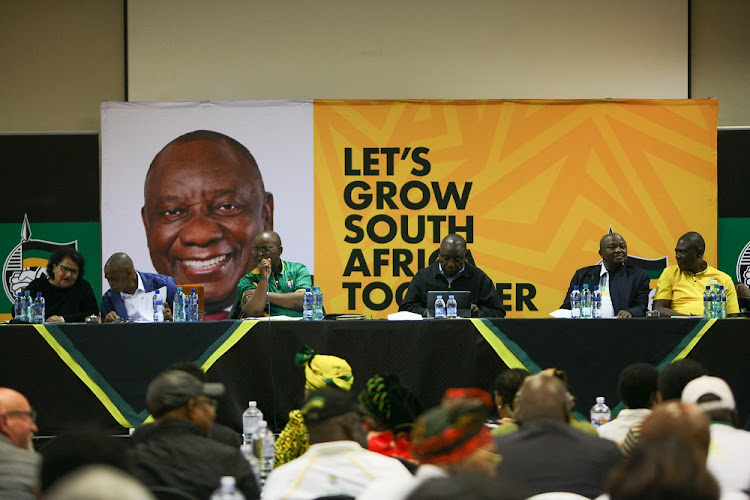 The ANC's top six, which include president Cyril Ramaphosa and secretary general Ace Magashule, prepare themselves ahead of the NEC meeting of the ANC in Pretoria.
Image: ALaister Russell/The Sunday Times

ANC secretary-general Ace Magashule said the party would not discuss the outcome of the general elections at its national executive committee meeting in Irene, near Pretoria, on Monday.

The meeting will, however, discuss candidates for the position of premier in the eight provinces the ANC will govern. It will also discuss who will be the leader of its official opposition in Western Cape.

In a short media briefing at the St George's Hotel before the NEC meeting was set to commence, Magashule said the names of premier candidates had already been submitted for consideration.

"This is a special NEC. We are just discussing the issue of premier elects because you know in terms of the conference resolution, the provinces must give us three names, and the provinces have done so. The decision-making body on this matter is the NEC," Magashule said.

ANC Secretary General Ace Magashule has rubbished comments that the party was rescued by President Cyril Ramaphosa in the 2019 national and ...
News
2 years ago

"We are going to have a fully fledged NEC because we have to analyse each and every aspect of elections outcomes, but not today."

Answering questions on the ANC's controversial parliamentary list, Magashule said the only way changes could be made was if parliamentary candidates resigned.

"We have registered the list, the list is with the IEC. There is no list that I can change. To take out a person from parliament from the list, that person must resign," he said.

He also emphasised that there was "no fallout" between him and President Cyril Ramaphosa.

"We work as the leadership of the ANC, we are a collective and we move as such," he said.