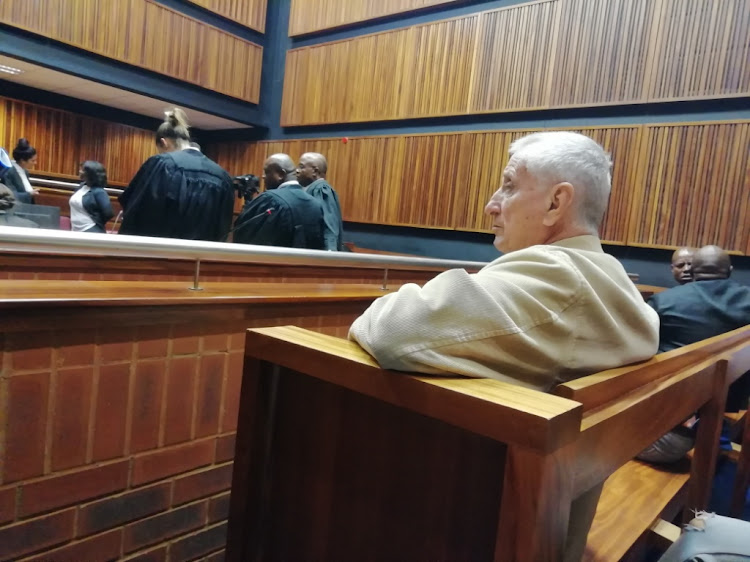 João 'Jan' Rodrigues made a brief appearance in court on January 28 2019 in connection with the murder of Ahmed Timol.
Image: Shain Germaner

The state's attorneys have received a tongue lashing for failing to appear at the criminal proceedings of João 'Jan' Rodrigues, one of the men believed to have been responsible for the death of apartheid activist Ahmed Timol.

Rodrigues, a former apartheid-era policeman, stands accused of murder for his role in Timol's death in 1971. This followed a high court inquest in 2017 that found that the activist’s death was not suicide, as claimed by authorities at the time.

An initial inquest in 1971 saw a magistrate side with Rodrigues, who claimed that Timol had committed suicide by jumping through a 10th-storey window while in police custody at the infamous John Vorster police station in central Johannesburg.

Judge Billy Mothle overturned this ruling in 2017, stating that Rodrigues' role in Timol's death should be investigated further, alongside two other security policemen, Neville Els and Seth Sons.

A trial date for Ahmed Timol murder accused João “Jan” Rodrigues has been set for January 28 in 2019.
News
3 years ago

Since he was criminally charged, Rodrigues' legal team has already let the court know that they intend to fight for a permanent stay of prosecution for their 79-year-old client.

On Monday afternoon at the high court sitting in Palm Ridge, Rodrigues made a brief appearance. It was revealed the state attorneys had failed to make its representative available. Because of Rodrigues' stay of prosecution application, the national director of public prosecutions is meant to have a representative at court if it wishes to oppose.

However, Judge Ramarumo Monama made sure to state during proceedings that the state attorneys representing the NDPP had not bothered to let him know they would not be present - an act he declared "unacceptable".

He was quick to highlight that the NDPP’s attorneys were paid with public funds and that there was no excuse for the advocate to fail to indicate why he or she could not attend.

The judge ordered that all the parties involved need to have their written arguments completed by February 18, to ensure the application could go ahead on March 28.

"One would hope by that time … we shall receive the full co-operation of the state attorney as far as possible," the judge said.

The criminal proceedings will continue on April 8 if the stay of prosecution application is unsuccessful.