Timol judgment: Lessons for the future 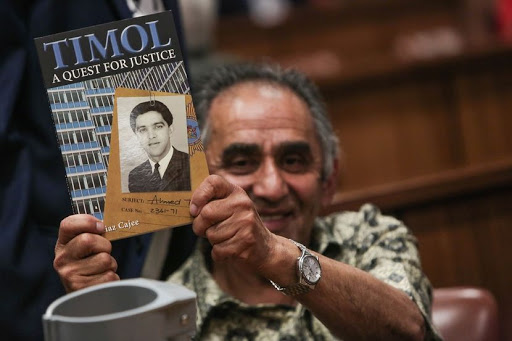 Ahmed Timol’s Brother, Mohammed holds out a book written by Imtiaz Cajee, Timols Nephew ahead of the judgment into his death at the North Gauteng High Court in Pretoria. Timol died after falling from the 10th floor of John Foster Square in 1971 while being detained. / Alaister Russell

The Pretoria high court has pointed out key lessons for a democratic South Africa‚ drawn from the reopened inquest into the death of activist Ahmed Timol at the hands of the apartheid police.

On Thursday‚ Judge Billy Mothle found that the initial 1972 inquest‚ which accepted that Timol committed suicide by jumping from the 10th floor of the notorious John Vorster Square in Johannesburg‚ was part of a cover-up on the real cause of death‚ which he ruled was murder.

He said of importance was that all branches of the State had to ensure that the boundaries set by the constitution for the respect of human rights and dignity should never be crossed.

“It should be the task of all branches of the State to begin to develop a culture of intolerance to any form of violation of human rights‚” the judge said.

He said one of the lessons from this reopened inquest was the fact that the reopening came late in the day when most of the members of the Security Branch involved with the interrogation of Timol and the investigation of Timol’s death had died.

Mothle lamented that the court had to deal with the mysterious disappearance of part of the 1972 inquest record dealing with the evidence of the police officials‚ in particular page 3 of the affidavit of former apartheid police sergeant Joao Rodrigues.

The judge said this piece of evidence‚ according to the 1972 inquest magistrate’s judgment‚ explained how Timol fell.

“Consequently‚ the key police witnesses who would have been called to testify again in regard to the events preceding the fall were not available. It is therefore important for the future that the state ensures that the records of inquests are preserved‚ considering the fact that the (Inquest) Act provides for reopening without any limitation as to time‚” Judge Mothle said.

The judge said the inquest also revealed that there were many more families‚ about 65‚ who were seeking closure on unanswered questions regarding the demise of their loved ones while in apartheid police detention. He said these families needed healing and closure‚ saying it was the court’s view that these families‚ particularly those where the original inquest ruled the cause of death in detention was suicide‚ should be assisted‚ at their initiative‚ to obtain and gather further information for their initial inquest to be reopened.

“The Human Right Commission‚ working in consultation with the law enforcements agencies‚ should be sufficiently resourced to take on this task‚” the judge said.

Mothle found that Timol was pushed from the 10th floor or roof of the building‚ with a clear intention to commit murder and that there was prima facie evidence implicating apartheid police captains Hans Gloy and Faan Van Niekerk.

The judge said the duo were “on duty and interrogating Timol at the time he was pushed to fall to his death”.

“Rodrigues‚ in his own version‚ participated in the cover-up to conceal the crime of murder as an accessory after the fact‚ and went on to commit perjury by presenting contradictory evidence before the 1972 and 2017 inquests. He should accordingly be investigated with a view to his prosecution.”