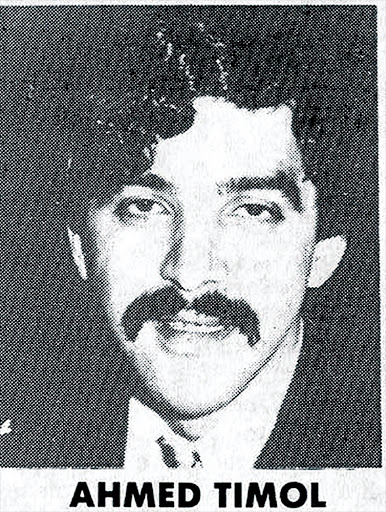 Apartheid officer has been charged with the murder of Ahmed Timol

The nephew of murdered anti-Apartheid activist Ahmed Timol described how surreal it was seeing the state security branch officer accused of his murder being charged for the murder in the same police station his uncle died in.

Sergeant Joao “Jan” Rodriguez was today expected to be charged with the murder of Timol, who was killed nearly 47 years ago.

Speaking ahead the Rodriguez’s court appearance, Timol’s nephew Imtiaz Cajee said he was overcome by emotions after seeing the 80-year-old being charged at the same police station.

“I am overcome with emotions that more than four decades later I witnessed him handing himself over and is about to have his first court appearance. Things have come full circle and we are happy that he will finally get his day in court,” Cajee said.

Cajee said the family had begrudgingly accepted the outcome of the first inquiry looking into his uncle’s death.

“But nine months ago we were overjoyed when Juge Billy Motle overturned the outcome and thought it would be fair to charge Rodriguez,” he said.

Rodrigues gave evidence in last year’s reopened inquest into Timol’s death in the North Gauteng High Court in Pretoria, which replaced the 1972 court’s suicide finding with one of murder.

Former apartheid security branch officer Sergeant Joao “Jan” Rodrigues will appear in the Johannesburg Magistrate’s Court on Monday on a charge of ...
News
3 years ago

He was a member of the security branch who pushed paperwork and administration and is the last known person to have seen Timol alive before the then 29-year-old activist allegedly fell to his death from a 10th floor window at John Vorster Square in 1971.

Rodrigues told the inquest that he had “never touched” Timol and he had declined to write the statement his seniors had allegedly wanted.

What he presented to the court was a repetition of the statement he had made at the first inquest into Timol’s death in 1972.

In his statement at that inquest‚ the former cop said that Timol had jumped to his death after he had asked Rodrigues to accompany him to the bathroom.

At the time Rodrigues entered the office where Timol was held‚ two policemen - Captain JZ van Niekerk and Captain JH Gloy - were inside with him. They had interrogated Timol.