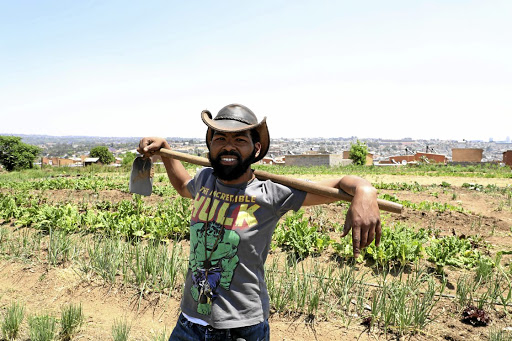 Co-founder of Urban Fresh Fazlur Pandor tills the land in Alexandra where fresh produce is grown and sold to several organisations, government and small shops around Gauteng.
Image: SANDILE NDLOVU

A dumping ground where women were regularly being raped and guns hidden has changed the lives of people in Alexandra after it was turned into an urban farming cooperative.

Violet Phala Mabaso, 57, who was unemployed before she became a farmer in 2015, said the women of Alexandra wanted to prevent violent crimes in the area and also provide food security. "I have been able to feed my children and put my grandchildren through private schools because of the success of my farm," she said.

The bubbly businesswoman said her 1hectare farm, Molobanyane, now have chilli pepper, herbs, onions, beetroot and vegetables. She had since hired two people to work at the farm. In March she won R40000 at the Land Care awards hosted by the national department of agriculture forestry and fisheries.

"What I need now is more land to create more jobs and grow more vegetables."

Mabaso is known in the community for selling packaged dried herbs. She said her dried chilli is one of the most popular products.

It was at this cooperative in 2015 that Fazlur Pandor and his business partner Rogan Field met the founders and began buying some of their produce to sell to a wider market.

The two founded Urban Fresh, which sells fresh produce all over Gauteng to small shops such as the Munching Mongoose, Fruits and Roots, and Fresh Earth.

Now Mabaso's herbs are also found at top restaurants in Sandton. "We saw a gap in the market. A lot of urban farmers have nowhere to sell their produce except to their communities," Pandor said. 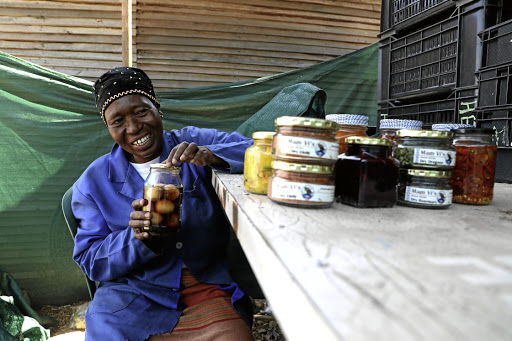 Violet Phala Mabaso with some of the products she produces at her garden in Alex, northern Johannesburg.
Image: SANDILE NDLOVU

"Many farmers don't have resources such as cold storage, packaging and transport to deliver the produce and we can help with that," he added.

The passionate farmer said although his company buys and sells some of the produce, most of it is sold to communities who need fresh vegetables the most. "Although more and more companies want to buy from black farmers, it's important that the food goes to the community as well," he said.

Pandor said after his late girlfriend was diagnosed with breast cancer they made a conscious decision to change their lifestyle, and that included him leaving his stressful finance job in the corporate world. "I was making a lot of money in corporate but I'm happier now. I'm working from 4am but I get to see the sun rise," he said.

Pandor said although it has been tough, 2018 has been a good year for Urban Fresh and independent farmers. 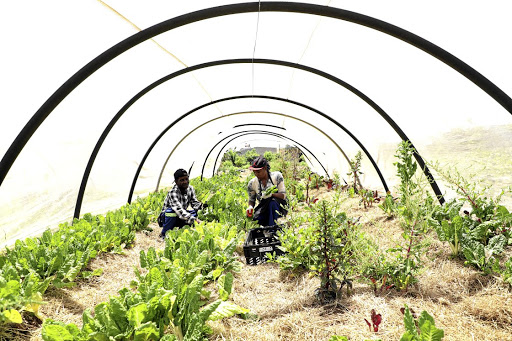 "We've been able to help the farmers learn business skills and prevent issues such as supply shocks. Recently, we've had hail and that can damage crops. A back-up is needed to ensure that the businesses farmers supply to do not feel that shock," he said.

Pandor said he wanted Urban Fresh to grow and be in a position where it can own its own land to grow its supply and enter bigger markets.

Most of the owners of cooperatives are senior citizens who use government land to keep their minds and bodies healthy.

Mary Raphela, 77, and Obed Malinga, 76, said their farm, Zama-Zama, has helped them feed their families and make Alexandra a safer place.

"Women were being raped here and we were able to turn something ugly into something beautiful," Raphela said.