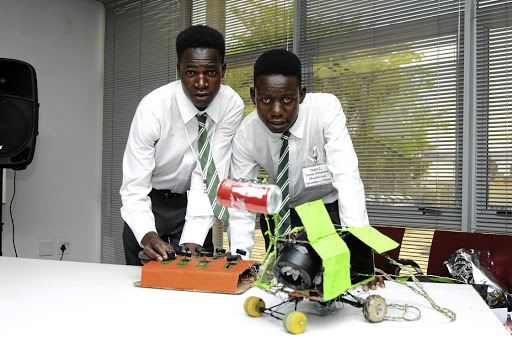 Two high school pupils from Kanyamazane, in Mpumalanga, have successfully developed a prototype robot to help with extinguishing fires.

Trevor Simelane, 16, and Joseph Mdluli, 17 were yesterday crowned the winners of the HIP2B� 3M Innovation Challenge - a competition for pupils to come up with innovative ideas to deal with problems in their communities using science.

The competition, which was founded in 2002, is the brainchild of billionaire businessman Mark Shuttleworth.

Simelane and Mdluli said they were inspired by the recent fire at the Bank of Lisbon building in the Johannesburg city centre where three firefighters died last month.

They won a cash prize of R1500 each, an iPad each and a goodies bag.

"We decided to tackle the problem of fires because it is one of the top three [problematic] issues in the country," Simelane said.

The grades 9 and 10 duo from Mandlesive secondary school were in the top three of the annual HIP2B� 3M Innovation Challenge that was held in Johannesburg yesterday.

They impressed the judges by being able to make their prototype with the few tools and materials they had access to in their village.

A South African duo has developed a compact robotic system that can detect explosives through the air.
News
3 years ago

Their prototype robot, which was made out to look like a wire toy car, can be plugged into an electrical socket and controlled with their cardboard box remote to move around and pick up objects such as a cool drink can.

"The robot is meant to detect people in the building and extinguish class A to F fires. It uses dry powder and wet chemicals to stop the fire instead of water," said Simelane.

"It can also take the smoke from the fire and turn it into carbon dioxide to extinguish fires," Mdluli said.

The duo said they wanted to help firefighters have an easier and safer job to do. "This robot must be controlled by a firefighter who is away from danger," said Mdluli.

Simelane said he has been disassembling toys and reconstructing them since he was a child, and now he has been able to use his talent to make the first version of the ambitious robot.

"I hope that one day this robot and our ideas can be used to tackle the issue of fires in our country, and that it will be exported to other countries," he said.

The other two pairs are pupils at Mahube Valley secondary school in Mamelodi, east of Pretoria.

The Ledwaba sisters, Nomvula, 16, and Elizabeth, 15, came up with the idea to make a solar energy bookcase that can light up their desks when they have no electricity.

Hudson Mashaninga and Thokozani Mlauzi are developing a backpack that can store litter to avoid polluting the environment in areas that have no available dustbins.

Managing director of HIP2B� Cathryn Payne said: "It's been one of the hardest years to make a decision on a winner."

She said they wanted to ensure that students who came up with ideas would be able to realise their ideas come to life.