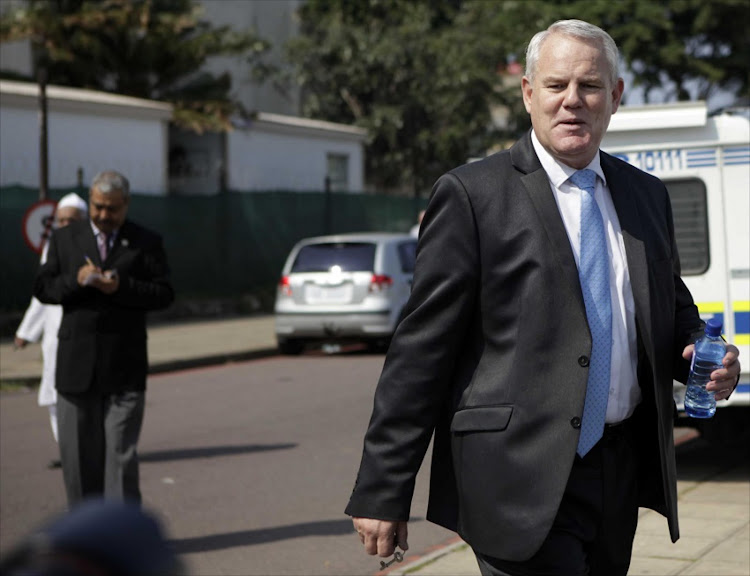 The Zuma family has closed ranks in the wake of stunning revelations by retired KwaZulu-Natal Hawks boss Johan Booysen that the former president and other key ANC figures were plotting to kill him.

The secret scheme‚ alleged to have been hatched during a clandestine meeting in a low-cost housing settlement outside Durban‚ was thrust into sharp focus by DA MP Dianne Kohler-Barnard during the police budget debate on Tuesday.

“So great is the fear of General Booysen that a hit has allegedly been taken out on him‚” she said.

“There is confirmation from three independent and reliable sources that MK [Umkhonto weSizwe] veterans from Cornubia near Phoenix in KwaZulu-Natal have been taken on to do the job after meetings with none other than Jacob Zuma‚ Super Zuma and Sihle Zikalala‚” Kohler-Barnard said.

“Dudu Myeni is also implicated after meetings with the vets. Indeed‚ if General Booysen so much as stubs his toe‚ we’ll know where to look.

High-ranking KwaZulu-Natal policeman and former Durban Hawks boss Colonel Rajen Aiyer was arrested on Wednesday on charges of defeating the ends of ...
News
4 years ago

"I have had death threats over the years and I know that getting it out in the open tends to diminish the threat because once these conspirators realise you know what they’re plotting and that you’re not scared to take them on – they back off. "I am the last person who will leave someone under threat. Imagine I knew [about these threats] and he [Booysen] had been killed and I had done nothing."

The alleged conspirators have all strenuously denied the allegations involving the veteran policeman‚ who negotiated an early retirement package last year. He has since taken up a corporate role in the private security sector.

The former president‚ accused of being at the centre of the assassination plot‚ is the only player to stay mum‚ an indication that he’s gone to ground.

Booysen’s proximity to Zuma as a police investigator has before been a point of contention‚ with Zuma’s son Edward swept up in a multi-million rand corruption probe.  In 2011 the junior Zuma is alleged to have urged Booysen‚ while the latter was still head of the Hawks in KZN‚ to release the state’s grip on millions paid to controversial businessman Thoshan Panday.

Booysen has held that Zuma and Panday were in business together‚ and that Edward had come to his office at police headquarters to try to influence his corruption investigation into Panday.

"He said he had invested R900‚000 in one of Panday’s businesses and wasn’t getting his dividends because Panday said I had frozen his payments. He asked whether I could release Panday’s R15-million. I told him that I couldn’t do that or I’d be guilty of corruption myself‚" Booysen wrote in his book‚ Blood on their Hands‚ published in 2016. "I told him to demand his R900‚000 back from Thoshan Panday. Once he had it he should take it and run and not look back. Months later‚ a friend phoned me and said someone was with him and wanted to talk to me. It was Edward. I jokingly asked if he had taken my advice. He said he had. I didn’t believe him."

Panday and his web of companies had been in the spotlight after securing millions of rand in police procurement contracts.

Criminal charges against him and other top cops were withdrawn‚ although the NPA is in the process of reviving their prosecution.

Edward Zuma has denied having close links with Panday and cannot recall the meeting with Booysen. Speaking to the Sunday Tribune in 2015 he confirmed he’d met with the top cop‚ but later changed tack and denied he’d ever been to Booysen’s office.

In the same year as his supposed meeting with Booysen‚ Panday was one of about 500 guests who attended Zuma's glitzy wedding.

On Wednesday Zuma offered the former cop some advice.

“He must go to the police and report that – I will give him that advice‚” he told Times Select.

Just why Zuma and others would plot to kill the retired cop remains veiled in mystery.

Booysen and members of the Cato Manor Serious and Violent Crimes Unit were arrested in 2012 on allegations that they had been running a "death squad".

They face a litany of charges‚ including theft and murder‚ specifically of suspects during the course of their arrests. They allegedly killed suspects or rivals of taxi operators they were doing business with and planted weapons to frame crime scenes — collecting incentive awards for good work as reward.

Booysen has successfully had racketeering charges against him set aside‚ only to have them reinstated by National Director of Public Prosecutions Shaun Abrahams in 2016.

Further review applications launched by Booysen and his co-accused are pending before court.