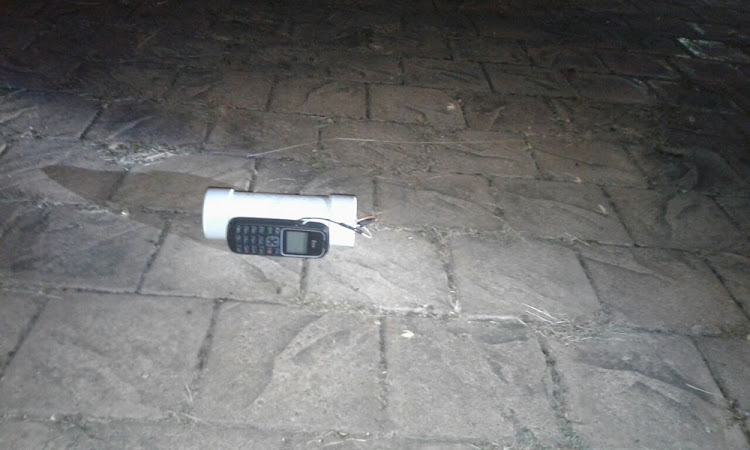 Bomb technicians are expected to analyse what appeared to be an improvised explosive device‚ recovered from the Imam Hussain mosque in Ottawa‚ Verulam‚ on Sunday night.

In an operation which lasted several hours‚ explosives experts carefully examined the pipe bomb - a length of PVC tubing and a cellphone affixed by wires - before making it inert and transporting it away from the site.

The mosque‚ as well as the surrounding neighbourhood‚ had been evacuated after the device was found in the pulpit of the building‚ underneath a chair used by the moulana during prayer meetings.

It had been moved outside of the building and x-rayed by technicians using specialised equipment.

It is understood that the device‚ which authorities have not concretely confirmed is a bomb‚ had been found by an electrician working in the mosque during an evening prayer.

An “improvised explosive device”‚ which forced the evacuation of the Imam Hussain Mosque in Verulam‚ north of Durban‚ on Sunday night‚ had been ...
News
4 years ago

It was discovered just hours after police minister Bheki Cele and a delegation of top police brass had toured the building as a part of a press tour following a fatal knife-attack last week.

Police and security personnel remained at the scene until well after midnight on Sunday‚ until the device was moved off site and the rest of the mosque thoroughly searched. Hawks spokesman Captain Simphiwe Mhlongo could not be reached for comment at the time of publishing.

Mosque chairman and co-founder Azaad Seedat‚ speaking to TimesLIVE at the scene‚ said those preparing to close the mosque for evening prayer found the device. “We can’t say too much now but the guys were getting the place ready‚ partitioning off the damaged sections of the place that were burnt‚ and they found the bomb near the pulpit.

“We just got everyone out of the building. All the houses surrounding the mosque have been evacuated‚” he added.

The Hawks have taken over the investigation into a mosque attack in Verulam.
News
4 years ago

Five days ago‚ Abbas Essop‚ a mechanic‚ charged headlong into the mosque in the small town‚ north of Durban‚ after three knife-wielding men stormed the building after midday prayers.

The caretaker and muzzein (the man tasked with leading the call to prayer)‚ Muhammad Ali‚ had noticed the men at the gate and thinking they were coming to pray‚ let them inside.

Once in the property‚ the men attacked Ali and Moulana Ali Nchiyane with knives before torching the mosque's library. Essop - whose mouth was duct-taped and his throat slit - died in hospital.

He became a collateral casualty in the attack‚ believed to be motivated by “extremist elements” intent on killing the resident moulana and razing the building to the ground.

Shia devotee Moobaruk Ally said that they had come under attack. “We have not done anything‚ this is an outside group or force that has attacked our mosque.”

He surmised that the bomb had been planted during last week’s attack and that it had been missed by police forensic investigators who had examined the crime scene. “This is not us‚ the police should not say one of us did this. This is a failure on the police for not finding this device when they searched the building.”

Moulana Aftab Haider‚ national coordinator of the Ahlul Bait Foundation of South Africa which owns the mosque‚ had earlier said there was no doubt that the knife attack had been orchestrated by “terrorists”.