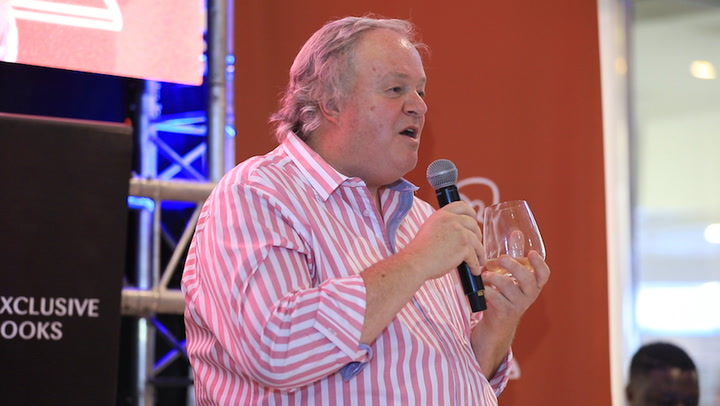 Veteran journalist and author of 'The President's Keepers' Jacques Pauw says he knew he would run into legal troubles while writing the book.
Image: ALON SKUY

Journalist Jacques Pauw knew he might face legal problems for the next couple of years when he was writing The President's Keepers.

He believes the reception of the book shows the tide is turning against the prevailing political establishment.

"The pomegranate has burst open. The pips are falling out‚" Pauw said at the book launch on Wednesday at Hyde Park Corner in Johannesburg. "People want the truth."

A crowd of about 1‚000 people gathered at the shopping mall to hear him speak.

SSA sent out a second cease-and-desist letter to get The President’s Keepers removed from shelved.
News
4 years ago

Pauw said he had received a message on Monday from Paul Engelke that an arrest warrant has been issued for him in Russia.

"I don't know whether it is true‚" Pauw said.

Engelke is an advocate who previously worked for the State Security Agency (SSA) before he left in 2015 as a senior law advisor. He is currently a lecturer in law at the Moscow State University.

The book alleges Fraser was complicit in looting hundreds of millions from PAN and that he was potentially guilty of treason for setting up a computer server at his home into which the PAN reports were fed.

The launch of the book The President’s Keepers by Jacques Pauw was cancelled on Wednesday night after a power outage.
News
4 years ago

Pauw said: "He (Engelke) was not the man that gave me the reports. I already had the reports before I left for Russia."

The possible reason for Engelke's arrest is the Fraser family calling him an "apartheid spy/double agent" in a press release on Monday.

Pauw joked about Engelke and said: "Nothing gives a better introduction to a book than Russia."

Pauw seemed relaxed‚ despite death threats and possible interdicts to stop the book. He did not say why‚ but is still expecting a "big reaction from the law enforcement agencies".

The discussion touched on the nature of the SSA‚ which Pauw described as a "black hole in which they pour your money".

“If you don’t stop writing about Jacob Zuma‚ you are going to be dead.”
News
4 years ago

Before the discussion people lined up to buy a copy of the book. Most buyers said they were doing so out of duty‚ despite a PDF version of the book circulating on social media.

William Murray‚ 70‚ from Johannesburg has read the digital copy‚ but still bought the book.

"Out of honesty and out of duty to the author‚ I want to buy it‚ so that he gets a royalty for what I have already read."

Murray believes a lot of South Africa's problems could be solved if large amounts were not lost in the fiscus.

"It's been stolen. Where has it gone? This book takes a lid off."

Sonwabile Ndamase from Cape Town said: "I wanted to contribute and pay for the book‚ because I believe in what Jacques is trying to do."

He believes the book can be a game-changer.

"I have heard too much lies and denials and you sometimes end up doubting your own intelligence when these people give you counter-arguments about obvious things."

The Auditor-General has no insight into the operations budget of state security ... They have a massive budget. The same as crime intelligence of the police. Crime intelligence has a budget and it has a secret fund of around R600 million a year. Nobody audits that."

Pauw and Peter Bruce‚ former editor of Business Day and Financial Mail‚ discussed the book for about 40 minutes before the power went out. There were boos and some parts of the crowd started chanting‚ "Zuma must fall." A woman got on stage during the power outage and started singing Nkosi Sikelel' iAfrika.

After power was briefly restored‚ the crowd cheered‚ but it was to no avail. Bruce announced the launch was cancelled after several attempts to turn the lights back on.

Pauw seemed unfazed. He smiled and greeted old friends as security officials tried to block members of the public who wanted to get their copies signed. Pauw moved to Exclusive Books to sign his book.

A self-confessed smuggler‚ fraudster and money launderer has emerged as a contributor to ANC presidential hopeful Nkosazana Dlamini-Zuma’s bid to ...
News
4 years ago

Alison Bouter‚ 40‚ from Johannesburg said she is "impressed that our people are beginning to wake up and understand that things are not so kosher in South Africa".

Genine Roux‚ 39‚ from Johannesburg said she received the digital version‚ but wanted to get her hands on the hard copy.

"I always have my own assumptions about how (political) decisions are being made and how does Zuma still stay in power."

Roux was surprised by the large crowd that turned up.

"As South Africans‚ I think people are interested‚ why is he (Zuma) still there? We all know the writing is on the wall ... We want answers."

Dinga Nkhwashu‚ 40‚ from Centurion tried to get hold of a copy last week‚ but it was sold out.

"You have to buy the book to support a cause ... I bought two copies."