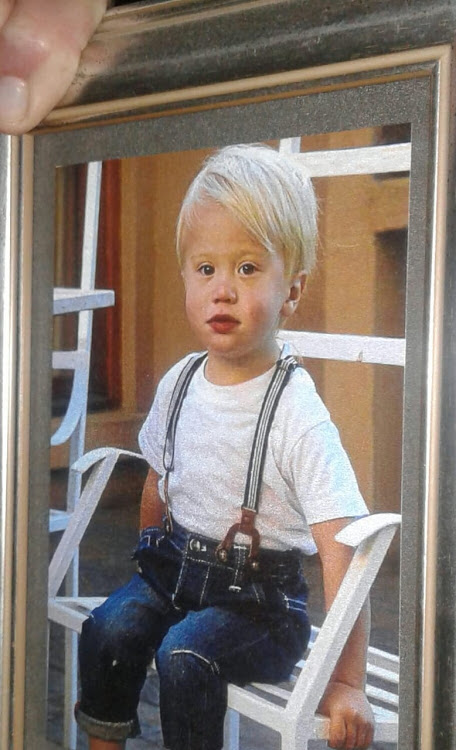 Liam Nortjé, 3, from Harrismith in the Free State, went missing in November 2017. A body believed to be his was found on Saturday.
Image: Supplied

After an intense two-year search for Free State boy Liam Nortjé, who went missing while in the care of his father, a body believed to be that of the toddler was found on Saturday.

The boy's father, Nantes Nortjé, was charged following his disappearance and found guilty of his murder - although at the time the body had not yet been found.

Free State police spokesperson Col Thandi Mbambo said the body was found on Saturday in Harrismith, but could not confirm if it was Liam’s body. She said they were waiting for results of a DNA test and could not say when this would happen.

“The mother has identified a couple of things that suggest that the body is Liam’s, but unfortunately as police we can’t rely on those to conclude that it is indeed his body," she said.

Mbambo said they were also investigating whether Nantes worked with other people in the disappearance and murder of his son.

Liam was never returned home after a visit to Nantes in November 2017. When asked where the child was, he gave police various addresses, but the child not found at any of these places.

At the time of the child’s disappearance, Free State police told Times Select that the father never returned the child after the weekend he spent with him, as per the maintenance agreement with the mother. The couple had separated after 23 years of marriage.

“After several failed attempts by the mother to get the child back, she opened a missing person case and police started searching for the little boy and the father,” police said at the time.

Nantes was arrested in July last year following an intense police search. “He was found hiding at an informal settlement in Ladysmith, KwaZulu-Natal, but the child was not with him."

Police said that even after his arrest, the father failed to disclose Liam's whereabouts. “He sent everyone on a wild goose chase. When asked where the child was, he gave police addresses, but the child was never found at those places," officers said at the time.

Teen's sister freed by the kidnapper.
News
2 years ago

Last week, the circuit high court in Harrismith found Nates guilty of Liam's murder. He was sentenced to life in prison for the murder, as well as three years, nine months and five years respectively for three assault charges.

Liam's case is just the third in SA's history where a murder conviction has been secured without the victim's body being found.

The first case was that of police constable Francis Rasuge, who went missing in 2004. William Nkuna was sentenced to life in prison for her murder in November 2005. Rasuge’s remains were discovered only in 2012, at Nkuna’s Pretoria home.

The second case was three-year-old Roodepoort toddler Liyaqat “Lee” Mentoor, whose murderer was jailed for life by the Johannesburg high court in October. Onke Mashinini, who was Lee's mom's boyfriend at the time, was found guilty of murder and defeating the ends of justice in relation the little boy’s disappearance.

An Eastern Cape elderly woman and her two granddaughters who were reported missing  in Tsomo earlier this month have been found murdered, said ...
News
2 years ago

A two-year-old toddler was snatched out of her mother's bed at night and raped by an unknown man. Police spokesperson Brig Motlafela Mojapelo said ...
News
2 years ago
Next Article