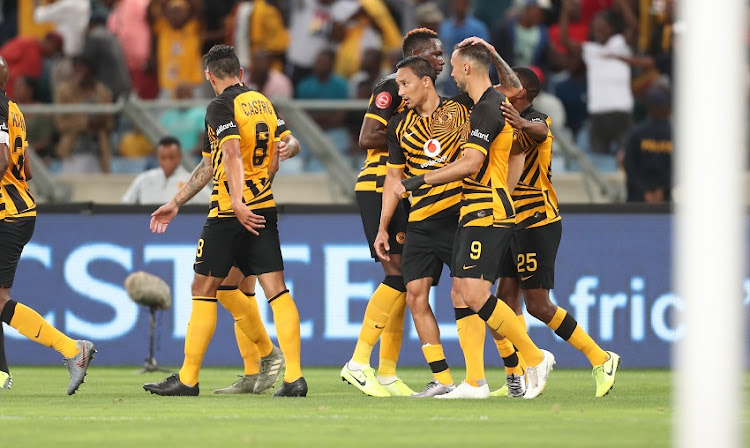 Kaizer Chiefs celebrating one of their goal during the Absa Premiership 2019/20 game between Kaizer Chiefs and Bloemfontein Celtic at Moses Mabhida Stadium in Durban the on 07 December 2019.
Image: ©/BackpagePix

Kaizer Chiefs are giving their supporters a precious early Christmas gift as part of their 50th anniversary celebrations – free tickets for their match against Highlands Park at FNB Stadium on January 8‚ a day after their birthday.

Chiefs turn a half a century on January 7 and have announced they will give away free tickets to the match against Highlands.

Tickets are limited and will be distributed on a first-come‚ first-served basis‚ and parking will also be free for all supporters‚ the club announced.

Supporters simply need to take their IDs to the ticket outlets at Computicket‚ Shoprite and Checkers. Two tickets will be provided per person.

Chiefs said in a statement on Tuesday afternoon: “Kaizer Chiefs will celebrate the first game as a 50-year-old club with its supporters at FNB Stadium on 8 January 2020 by giving away free match tickets.

“The game against Highlands Park will be played a day after South Africa’s most popular club celebrates half a century in existence.

“As a special gift to the loyal supporters who have travelled the long journey with the club‚ which was founded on 7 January 1970‚ we will give supporters a gift of a maximum two (2) tickets per person to attend the game with friends and family members.

“Tickets for the match are available for free collection at Computicket‚ Shoprite and Checkers outlets. All that is required is an ID or driver’s licence to receive this great reward.”

Chiefs’ marketing director Jessica Motaung said the fixture against Highlands is a historical and significant one and will be ideal for the club to reminisce with their older fan base‚ and educate the younger ones about the rich history of the Soweto giants.

“We encourage them to take advantage of the Christmas gift the club is offering and get their tickets‚” Motaung said.

“It is important that no one is left out in our celebrations in our 50th year and we urge supporters to get to Computicket as early as possible to avoid disappointments.

“We will roll out our more mind-blowing plans as we progress.”