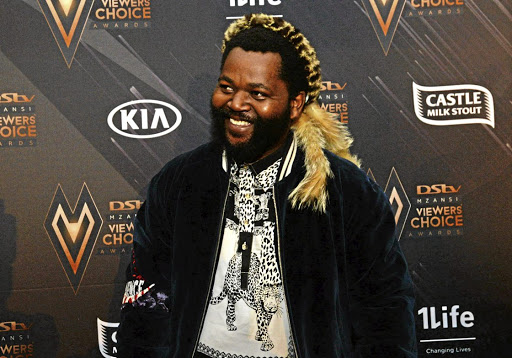 Sjava during the DStv Mzansi Viewer's Choice Awards which took place in Sandton, Johannesburg, in 2018. The awards cut ties with the Umama singer this year.
Image: Gallo Images

The SABC will continue to play Sjava's music on its various radio and television channels uninterrupted amid allegations of rape.

The public broadcaster has told Sowetan it will first let the law take its course in Sjava's case before it reaches a decision over boycotting his music.

The numerous withdrawals come after organisers learnt of the rape case opened against Sjava by former girlfriend and musician Lady Zamar last week.

"The SABC respects the rule of law and believes that any allegations levelled against anyone should follow the due process of the law," acting SABC spokesperson Mmoni Seapolelo said.

"Thus at this stage, it is premature for the SABC to take any decision regarding broadcasting Sjava's music."

The DStv Mzansi Viewers’ Choice Awards have stripped Sjava of his two nominations amid allegations of rape.
Entertainment
2 years ago

In the week that the news broke between February 29 and Friday, his music didn't see a massive drop, according to the official Radio Monitor.

Radio Monitor is the official standard that captures airplay data and analysis in over 170 radio stations and 25 TV channels in SA.

Rapper K.O's latest single Flight School featuring Sjava sits on number nine on the chart. It has been played 99 times across 38 stations.

Sjava's solo single, Linda, is not far away at number 11 - rising one spot from number 12 the week before. The song was played 36 times across 19 stations.

"I did not rape her [Lady Zamar]. Ngithe mina [I said] I would follow legal processes to protect myself," Sjava wrote.

Another blow for award-winning musician Sjava as organisers of Miss Mpumalanga cancelled his performance for pageant's 2020 edition on April 18 in ...
Entertainment
2 years ago
Next Article