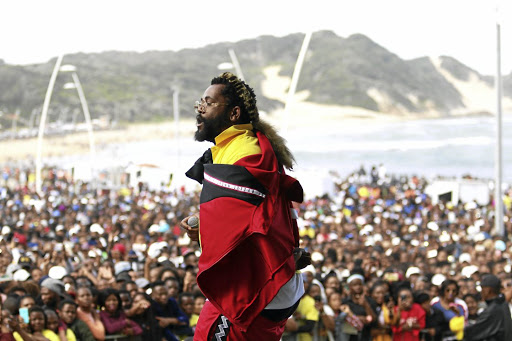 Sjava has responded to allegations he raped his ex-lover. /MICHAEL PINYANA

The DStv Mzansi Viewers' Choice Awards is still not ready to make an announcement on whether top nominee Sjava will participate in the awards ceremony next week following rape allegations against him.

Yesterday, MultiChoice Group senior manager for communications, Benedict Maaga, confirmed to Sowetan that they were in the middle of discussions over Sjava's involvement in the awards ceremony and a decision will be made public in "due course".

However, the pay channel opted to yesterday announce musicians set to perform at the awards next week at Ticketpro Dome in Johannesburg.

Meanwhile, Sjava has for the first time responded to rape allegations levelled against him by musician and ex-girlfriend Lady Zamar.

In the lengthy written statement, he vehemently denied sexually assaulting the Collide singer.

"I did not rape her [Lady Zamar]," Sjava wrote.

"People are saying that I made empty threats to take her to court after her allegations last year. Ngithe mina [I said] last year I would follow legal processes to protect myself.

Musician Sjava could face more woes after the Cape Town International Jazz Festival cancelled his performance after he was accused of rape.
Entertainment
2 years ago

Lady Zamar first made sexual assault allegations against Sjava in October on Twitter.

Sunday World reported at the weekend that Lady Zamar alleged that Sjava raped her in his hotel room in Thohoyandou after performing at the Royal Heritage Festival on September 9 2017.

Sjava admitted that a case of rape had been opened by Lady Zamar against him in Thohoyandou, Limpopo.

The Umama singer outlined his timeline of what happened since Lady Zamar accused him of rape last October.

"[On] 5 December 2019: I met with police officers from Thohoyandou police station. They asked [me] about the night (in September 2017) that Lady Zamar accuses me of raping her and asked for a statement," Sjava wrote.

"I gave my statement. They also got statements from some witnesses who were with us going to, during and coming back from the trip.

"The police told me that I had not been charged and that they were, at this stage, only gathering evidence and statements so that they could send it to the prosecuting authority who would decide if the case should be charged (sic) and prosecuted."