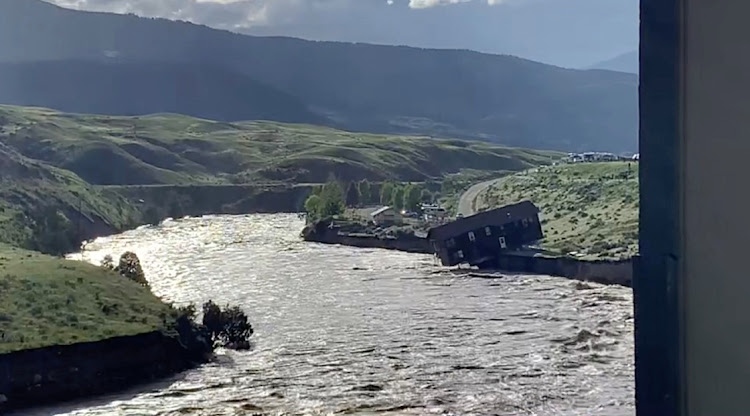 A house falls into the Yellowstone river due to flooding in Gardiner, Montana, US, June 13, 2022 in this screen grab obtained from a social media video. (Picture depicts flooding in Montana)
Image: Angie Lilly/via REUTERS / File photo

Sibanye-Stillwater suspended production at its two platinum group metals (PGMs) mines in Montana in the US on Monday night after heavy flooding damaged an access road, a spokesperson said on Tuesday.

The impact of the floods on production was yet to be determined, spokesperson James Wellsted said, adding that the Stillwater and East Boulder mines in the northern US state were undamaged.

Two trade unions signed a three-year wage agreement with miner Sibanye-Stillwater on June 11, one of the unions said on Sunday, removing the last ...
Business
2 months ago

“Road access to the Stillwater mine is likely to remain constrained for a period... but the East Boulder mine should be able to resume once the flood waters have dropped a bit (maybe tomorrow even),” Wellsted said in an emailed response to Reuters questions.

The road to the Stillwater mine was eroded and several bridges in the region damaged, the company said.

Sibanye said no injuries had been reported after the floods, which began on Monday. Sibanye's Montana mines together produced 570,400 ounces of PGMs in 2021.

The record flooding and rockslides forced Yellowstone National Park, which spans parts of Wyoming, Montana, and Idaho, to shut for the first time in 34 years.