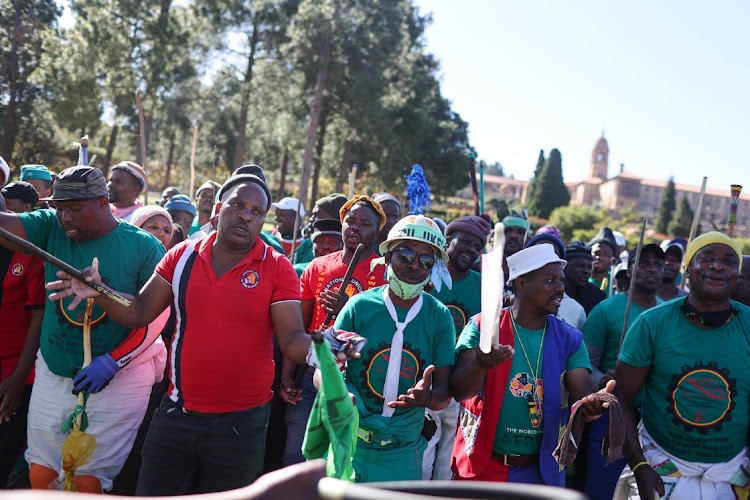 Striking Sibanye-Stillwater gold mineworkers have camped on the lawns of the Union Buildings for three weeks.
Image: Alaister Russell

A counter-offer tabled by the two unions representing workers at the Sibanye-Stillwater gold mines was rejected on Monday evening as wage talks hit another stalemate.

The two unions, the National Union of Mineworkers (NUM) and the Association of Mineworkers and Construction Union (Amcu), who had earlier on Monday rejected a new offer in the negotiations facilitated by the commission for Conciliation, Mediation and Arbitration, had put forward a counter-offer.

The counter-offer would have seen workers get a R800 increase in the first year, a R3,000 one-off payment and 5% rise for officials and artisans.

Sibanye-Stillwater had proposed a R700 increase, R3,000 one-off payment and a 5% increase for officials and artisans.

NUM spokesperson Livhuwani Mammburu confirmed that Sibanye-Stillwater rejected the offer about 10pm on Monday, which led to negotiations hitting a deadlock.

“We will meet Sibanye-Stillwater again this morning (Tuesday) but this will be about agreeing on a way forward as these negotiations have deadlocked,” Mammburu said.

The talks started on Thursday last week after Sibanye-Stillwater called on the CCMA to intervene in the dispute in terms of section 150 of the Labour Relations Act.

Mineworkers downed tools in March after a deadlock regarding wage increases, leading to the shutdown of mining operations at Sibanye-Stillwater gold mines with striking workers now going three months without salaries.

More than 2,000 striking workers have taken their wage increase dispute to the seat of government, camping outside the Union Buildings in Pretoria and demanding President Cyril Ramaphosa’s intervention.

It’s exactly a week since striking Sibanye-Stillwater workers took their grievances with their employer all the way to the highest-ranking office in ...
News
2 months ago

Striking miners talk about their struggle to stave off hunger

Striking workers at Sibanye-Stillwater Driefontein mine in Calrtonville have detailed their struggle to survive over the past eight weeks without pay ...
News
3 months ago

Two of the country's biggest mineworkers' unions said that workers at Sibanye-Stillwater's platinum plan to go on strike to show their support for ...
Business
3 months ago
Next Article