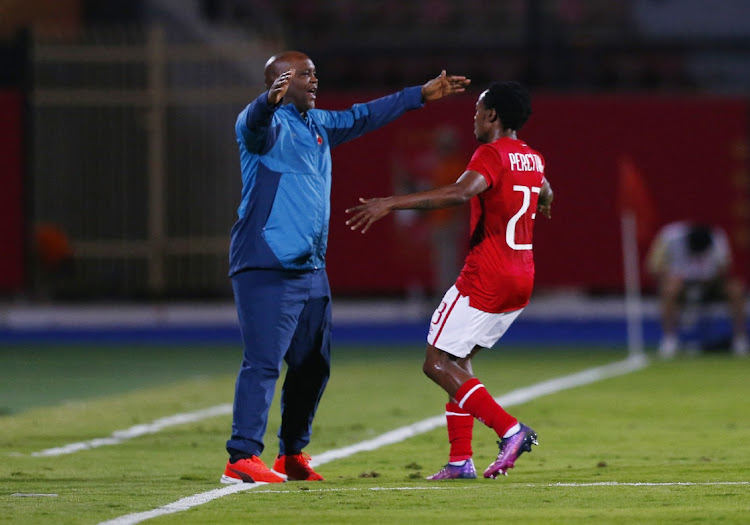 For Pitso Mosimane‚ the 4-0 home win against ES Setif in the first leg of Al Ahly's CAF Champions League semifinal would have been sweeter as it came amid another bout of fierce criticism against him‚ and because Percy Tau broke his scoring duck with a masterclass.

Tau‚ who had hit a dry run coming back from a series of injuries‚ was on fire at Al Salam Stadium and the obvious man-of-the-match on Saturday night scoring a brace against the Algerian outfit and providing an assist for Mohamed Sherif’s third goal.

Some had also been vociferously on Mosimane’s back as Ahly suffered a defeat and two draws in the Egyptian Premier League‚ and even the coach’s conservative tactics negotiating past Raja Casablanca in the Champions League quarterfinals came in for stick.

On Tau coming back so strongly for the big occasion Mosimane said‚ via Kingfut.com: “We need to be patient. After his goal drought‚ he scored in an important game in the semifinal.

“I know that we have a problem in finishing our chances but we need to be calm about it and I am happy that we managed to score four goals.

“ES Setif are a strong team and they had chances to score‚ but the sending off certainly helped us and we capitalised on it but this is football.”

Setif had Amir Karaoui sent off in the 35th minute.

Wael Gomaa‚ Ahmed Koshary and Taha Ismail were among former Ahly stars to heavily criticise Mosimane and his tactics in recent weeks.

“We still haven’t qualified to the final yet despite the flattering scoreline‚ and it won’t be easy to play against ES Setif in the return leg. “I have enough experience because I’ve been a coach for 21 years and have gone through a lot of difficult situations in the past.

Ahly’s second leg against Setif is in Algiers on Saturday night.

Kobola optimistic after Baroka get heroic point at Chippa

Despite odds stacked against Baroka, interim coach Vincent Kobola remains hopeful that they will avoid automatic relegation from the DStv Premiership ...
Sport
2 weeks ago

Sekhukhune United have reached their target of 32 points to ensure their safety in their debut campaign in the DStv Premiership.
Sport
2 weeks ago

Cape Town City mentor Eric Tinkler insinuated they did not really deserve to win against relegation-threatened TS Galaxy at the weekend, attributing ...
Sport
2 weeks ago

Orlando Pirates have one foot in the CAF Confederation Cup final after their 2-0 win in the semifinal first leg over Al Ahli Tripoli of Libya at ...
Sport
2 weeks ago
Next Article