Watford relegated after 1-0 defeat at Palace 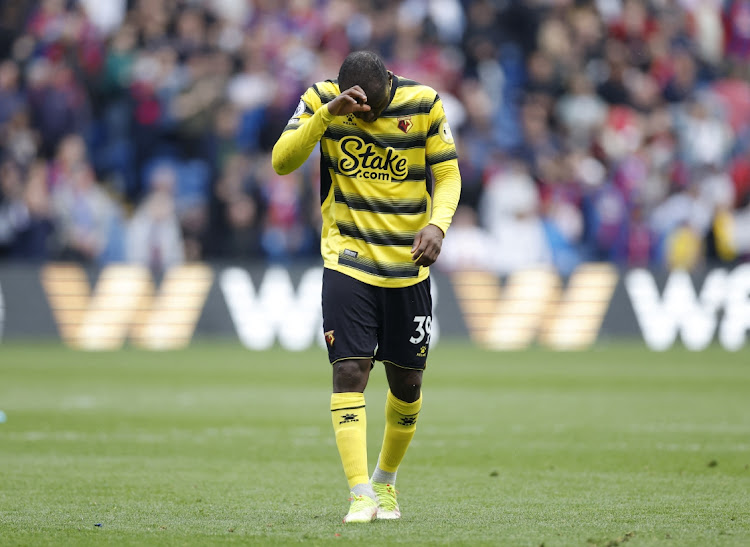 Watford were relegated from the Premier League on Saturday after a 1-0 defeat by Crystal Palace as Wilfried Zaha's first-half penalty soured former manager Roy Hodgson's return to Selhurst Park.

Palace were awarded a penalty following a VAR check for handball by Hassane Kamara and Zaha stepped up to slot home his 13th goal of the season after sending Watford goalkeeper Ben Foster the wrong way.

The visitors needed a win to keep alive their dwindling hopes of survival after last week's 2-1 loss to Burnley left them 12 points adrift of the safety zone but their timid display meant Palace comfortably kept Watford at arm's length.

Patrick Vieira's side climbed up to ninth place on 44 points while Watford remained second-bottom with 22 points and will join Norwich in the Championship, dropping down to the second division for the second time in three seasons.

"Last week, we were 1-0 up and looked as though we were going to carry that result through but when those last two goals went in... I think only someone who's got no idea what football is about would have believed we could still do it (avoid relegation)," Hodgson said.

"We were, I suppose, resigned to that to some extent last week, and I think that makes today's performance even more commendable... We kept going, we were competitive until the end and that was a good effort from our team."

Palace controlled the contest from the start and had plenty of first-half chances, with Marc Guehi nodding wide while Michael Olise and Zaha also sent shots past the post before taking a deserved lead through the penalty.

Odsonne Edouard nearly scored a superb solo goal just after the hour mark, dancing past the Watford defence before hitting the post from a tight angle after his shot went through Foster's legs.

Watford's task of scoring at least two goals became even more difficult when they were reduced to 10 men after Kamara, booked for handball earlier, was shown another yellow card for a foul on Michael Olise with around 20 minutes remaining.

Foster kept Watford in the contest with a string of fine saves, ensuring Palace's dominance did not reflect on the scoreline, but his team mates offered little in attack as they fell to their sixth straight league defeat.

Former Palace boss Hodgson, who left the Croydon club at the end of last season after four years in charge, arrived at Vicarage Road in January to try and save Watford from being relegated after they had slumped to 19th place.

Wins remained hard to come by under Hodgson, Watford's third manager this season after Xisco Munoz and Claudio Ranieri, as they beat only Southampton and Aston Villa this year in his 15 games in charge.

Hodgson, 74, is set to retire from top-level management when his contract at the Hertfordshire club expires at the end of the season, ending his long and distinguished career on a bitter note after suffering his first Premier League relegation.