Rockets 'put us under pressure from first whistle' 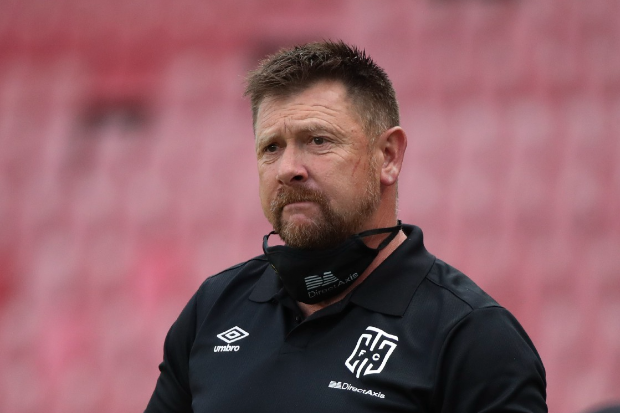 Cape Town City mentor Eric Tinkler insinuated they did not really deserve to win against relegation-threatened TS Galaxy at the weekend, attributing the 2-0 victory at home to luck.

Venezuelan winger Darwin Gonzales netted his first City goal early in the first stanza, while Mduduzi Mdantsane's penalty seven minutes before the final whistle put the game to bed. City have now gone 12 league games without a defeat, having last suffered a loss when SuperSport United beat them 3-2 in December.

"I am just happy with the three points but I don't think we performed well today, to be brutally honest. I think we have to give them [Galaxy] a lot of credit because they came here, they put us, from the first whistle, under a lot of pressure. I have to say our performance collectively wasn't great," said Tinkler.

"There was a lot of mistakes in defence, giving them too much time. When we needed to press them, we didn't. We rode our luck a little bit and sometimes you just got to say to yourself, thank God for the three points. Even when we play ugly football we can collect some points. That makes me happy."

Tinkler also said he felt the pitch at Cape Town Stadium did not allow them to play the brand of football they want to play. The City trainer then reserved special praise for his goalkeeper Hugo Marques, who kept his 13th DStv Premiership clean sheet of the season against the Rockets, the most by any keeper.

"The condition of the pitch right now isn't the greatest and that doesn't suit the brand of football that we play. Hugo kept us in the game with two very, very good saves," noted Tinkler.

Galaxy coach Sead Ramovic remains positive they will survive relegation, despite being the only relegation candidate who did not collect at least a point at the weekend. "I am sure we won't be the ones going down. I have trust in our abilities," said Ramovic.

Orlando Pirates have one foot in the CAF Confederation Cup final after their 2-0 win in the semifinal first leg over Al Ahli Tripoli of Libya at ...
Sport
2 weeks ago

Keagan Dolly missed a late penalty that would have kept Kaizer Chiefs' dream of  finishing second alive, as they played to an entertaining 1-all draw ...
Sport
2 weeks ago

Orlando Pirates co-coach Mandla Ncikazi says his teams need at least one away goal from the first leg of their Caf Confederation Cup semifinal ...
Sport
2 weeks ago