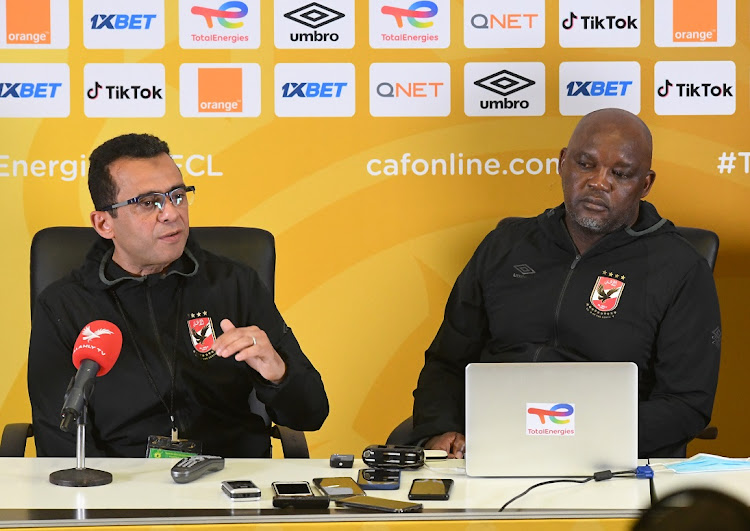 Al Ahly coach Pitso Mosimane has repeated his call for VAR (video assistant referee) technology to be introduced in all Caf Champions League matches after the Egyptian giants’ second successive defeat against his ex-club Mamelodi Sundowns in Johannesburg on Saturday.

Mosimane suggested the blame for lack of VAR in the group stage matches of the Champions League should go to his old boss, Confederation of African Football (Caf) president Patrice Motsepe who owns Sundowns.

Ahly went down 1-0 to a Peter Shalulile goal in Saturday's Champions League match at FNB Stadium, the same score as when they lost their Group A match against Sundowns in Cairo two weeks ago. But Mosimane’s defending champions will go through to the quarterfinals with Sundowns if they beat Sudanese clubs Al-Hilal and Al-Merrikh in their last two games, both in Egypt.

Mosimane said he finds it strange that the Egyptian Premier League has VAR for every game, but Caf does not have the technology in all Champions League games.

“I have always said we’ve benefited from VAR and some results have gone against us because of VAR.

“It’s difficult for the referees and linesmen to call it. It’s very difficult. We ourselves sometimes ask, ‘Are they offside or not?’

Pitso Mosimane: ‘Sundowns must leave me alone. I’ve moved on’

"What do you want? Move on, leave me. I’m gone," Pitso tells Sundowns.
Sport
5 months ago

“But we shouldn’t talk about it because fortunately we didn’t lose from a situation where VAR was supposed to be used. We lost on a goal that is a normal goal.

“The [setback] of not having VAR in African football is 20 years [compared to other continents where they use it]. And really, how much does it cost?

“How much does it cost if Egypt has it for every match? But anyway, let’s not go to VAR because we lost. But we’re 20 years behind on the continent.”

Mosimane appeared to be laying blame at the door of the Caf executive led by Motsepe, with whom the Ahly coach has had a rocky relationship since he left the Brazilians in September 2020.

“We’re still in the [former Caf president Issa] Hayatou era. There’s no difference. If there’s change, tell me where it is?” said Mosimane.

“Where’s the difference? I’ve been in this thing [Caf competitions] for eight years — more than eight years, in fact, with SuperSport United.

“But we didn’t lose the match because of [a VAR] situation.”