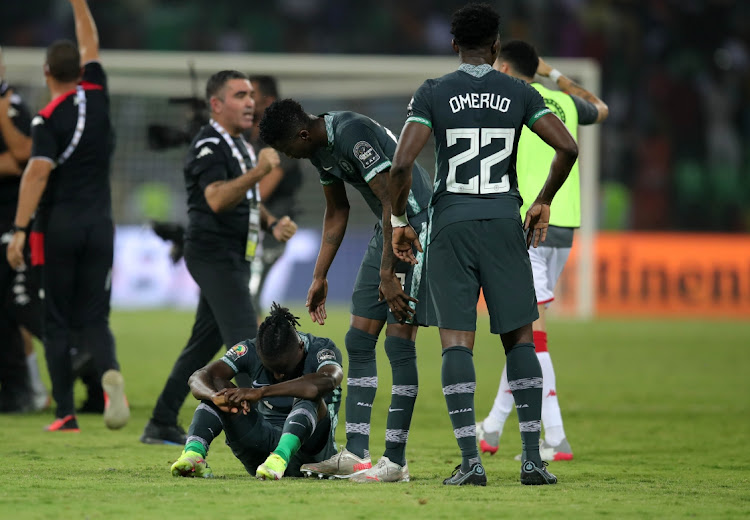 What promised to be a long campaign for Nigeria in the Africa Cup of Nations in Cameroon was brought to an abrupt end in the last 16 by Tunisia on Sunday.

Nigeria went into the game against the Carthage Eagles as one of the tournament favourites following a 100% record in the group stage, where they scored six goals and conceded one.

But continental football pundits were stunned by the Super Eagles' lack of firepower in losing 1-0 to Tunisia, who went into the game without seven key players who tested positive for Covid-19. Granted, Nigeria did lose Alex Iwobi to a red card.

Despite the early elimination, which was courtesy of a second-half strike by Tunisia skipper Youssef Msakni,  former goalkeeper Greg Etafia, who has four appearances for the Super Eagles, said they should return home with their heads held high having impressed many.

“It is football knockout stage... it is a once-off game. They did well in the group stages after winning three games,” Etafia told Sowetan yesterday.

“They are the only team [in the tournament] that won three games in the group stage, scored six and conceded one. I think they did well. This is a new generation that has a lot of energy.

“But once it comes to the knockout stage it’s about the team who take their chances and Tunisia did that and defended well. I think Tunisia on the day tactically, were a lot better than Nigeria.”

Interim coach Austin Eguavoen has confirmed that he will step aside and allow the Nigerian Football Federation to decide on the way forward.

Former Swallows keeper Etafia, who is a goalkeeper coach at TS Galaxy, feels whoever takes over will still get the best out of the team before the World Cup play-off match against Ghana in March.

“There was a massive hope for the team. We beat Egypt and the expectations were high. Everyone back home was hoping they would win the tournament,” he said.

“Still, there were a lot of positives we can take out and go to the World Cup play-off well prepared.

“Eguavoen was a technical director when Gernot Rohr was relieved of his duties [just before the tournament], so there was no-one who could come in immediately to take the team to Afcon.”

Hosts Cameroon made heavy work of beating 10-man Comoros Islands 2-1 on Monday night to advance to the African Cup of Nations (Afcon) quarterfinal ...
Sport
3 months ago

Musa Barrow scored a 71st-minute winner as Gambia continued their giant killing spree at the Africa Cup of Nations by pulling off an upset 1-0 win ...
Sport
3 months ago

Burkina Faso held off a gallant rearguard action from 10-man Gabon to advance to the Africa Cup of Nations quarter-finals with a 7-6 victory on ...
Sport
3 months ago

Africa’s four top players failed to make a mark at the Africa Cup of Nations (Afcon) finals but the start of the knockout rounds on Sunday offers a ...
Sport
4 months ago
Next Article