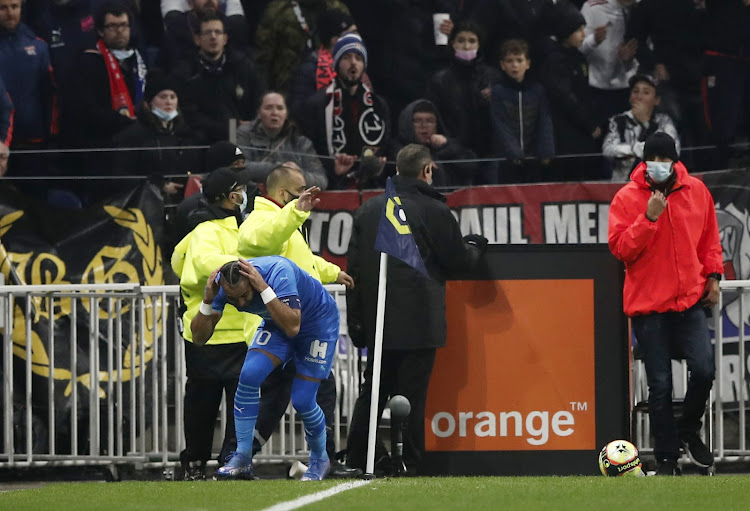 Olympique de Marseille's Dimitri Payet is hit by a water bottle thrown by a fan during the match against Olympique de Lyon.
Image: REUTERS/Benoit Tessier

The French “Olympico” was called off almost two hours after being suspended when Marseille's Dimitri Payet was hit by a bottle thrown from the Groupama Stadium stands.

Referee Ruddy Buquet sent the players to the dressing room after Payet fell to the ground as he was preparing to take a corner kick.

The stadium announcer initially said the match would restart, after a decision made by local Lyon authorities.

This was criticised by the French League (LFP), which called for an emergency meeting of its disciplinary commission on Monday.

It will likely announce provisional sanctions pending a full investigation that could last at least two weeks.

“They have to come to an agreement, this kind of problem is for the league to solve,” Maracineanu told France Info radio on Monday, her office later telling Reuters that the sports and interior ministries would meet regarding the matter on Tuesday.

“Everyone must understand that it's the survival of French soccer that's at stake.”

Ligue 1 has been marred by fan violence this season.

Nice were docked two points, one of them suspended, after serious incidents during their game in August against Marseille, whose players clashed with home fans who pelted them with missiles and stormed onto the pitch.

The northern derby between RC Lens and Lille was hit by crowd problems in September, with the start of the second half delayed after rival fans threw objects at each other before people ran on to the pitch, prompting riot police and stewards to intervene.

There has also been crowd trouble in Montpellier, Angers, Marseille and St Etienne.

Maracineanu said the incidents were a threat to French professional soccer's finances.

“We can't allow that a broadcaster who has bought rights must keep the conversation moving for more than an hour like they did last night when we don't know if the match is going to continue, it's a world where millions of euros are at stake,” she said.

“We've helped the soccer world during the health crisis to allow the return of fans in the stadiums.