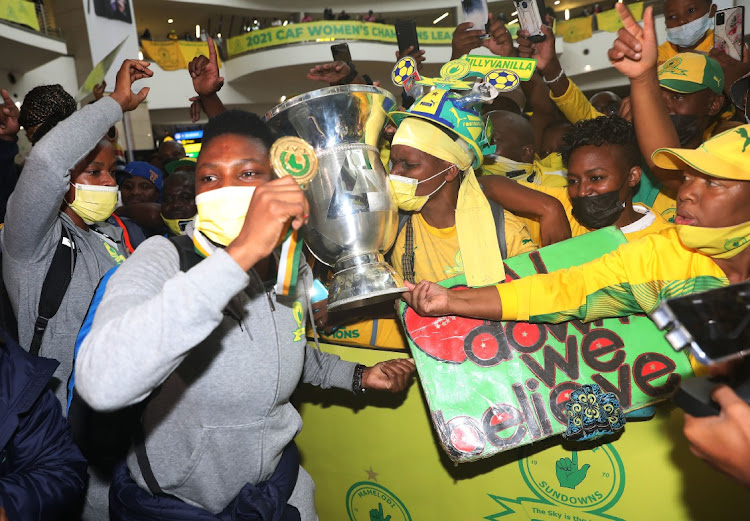 The Brazilians made history, winning the inaugural Caf Champions League title in Cairo, Egypt, at the weekend. The Tshwane giants defeated Hasaacas of Ghana 2-0 at the 30 June Stadium in Egypt, with goals scored by Chuene Morifi and Andisiwe Mgcoyi.

They emulated the men’s team that won the Champions League in Cairo against Zamalek under Coach Pitso Mosimane in 2016.

They were greeted with songs, loud cheers, and dances from the fans, politicians, family and senior club management, who all welcomed them in emphatic style.

Sundowns chairman Tlhopie Motsepe, who travelled with the team to Cairo, said the future of women’s football looks bright.

“It is a special day for Sundowns and SA football. We are filled with happiness, joy, and pride. The future of female football looks bright, and the sky is the limit. We hope our story will carry and inspire girls and boys in the country,” said Motsepe.

He said the club would reward the players financially, but he did not reveal the figures. “The figures are between the club and the players. What they achieved deserves a big reward.”

Coach Jerry Tshabalala said it was not an easy journey, and they did it for all South Africans. “We played against the highest-scoring teams and prevented them from scoring. Our management played a big role in helping us to arrive in Cairo a week before the tournament. Our work speaks for itself. We did our homework and got rewarded with the trophy,” said Tshabalala.

Skipper Zanele Nhlapho said team effort and hard work contributed to their success. “We played as a team and worked for each other. The team spirit was high with the singing and dancing. We mixed young and experienced players,” said Nhlapho.

Under-fire Swallows coach Brandon Truter could face the axe from the club as results continue to elude him following yet another defeat yesterday.
Sport
2 weeks ago

'The club has a taken a policy to reward these women,' says Sundowns chair Motsepe

There is a question mark over whether there is prize money for the Caf Women’s Champions League winners and participants, but Mamelodi Sundowns ...
Sport
2 weeks ago

Mamelodi Sundowns Ladies were crowned inaugural Caf Women’s Champions League winners after their 2-0 win over Hasaacas Ladies of Ghana at the 30 June ...
Sport
2 weeks ago
Next Article