Coach set to lecture her players 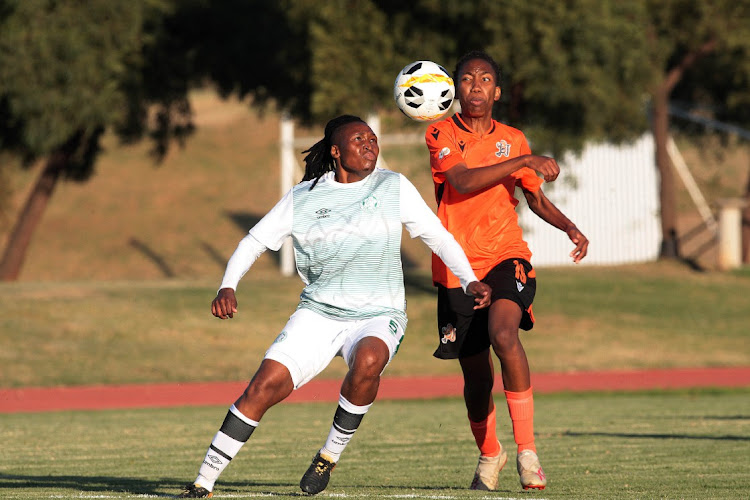 Keolebogile Putu of University of JHB fight for the ball with Majowele Mohapi of Bloemfontein Celtics during National Women's League at UJ Stadium ,in Soweto on Saturday..1-1 draw.
Image: Veli Nhlapo

Tshwane University of Technology coach Anna Monate described their Safa National Women’s League 2-2 draw against the University of the Western Cape as a bitter pill to swallow.

Monate was furious with her players for letting the three points slip from their grasp. “We dropped two valuable points at home. We had no business drawing this game. I will have a heart-to-heart discussion with my players. We had a proper game plan and did not stick to it. UWC did a smash and grab on us as we twice led in the game,” Monate told Sowetan yesterday.

She does not want to see a repeat of what happened in the next game when her team travel to the City of Roses to take on Bloemfontein on Saturday at Siwelelele Park at 3pm.

“I must have a one-on-one session with the girls to understand what went wrong. I watched the game several times on TV and do not understand why they failed to carry out the instructions,” added Monate.

Janine van Wyk FC climbed to the top of the log table on the first day following a commanding 5-1 victory over Ma-indies at the Giyani Stadium in Limpopo.

Bloemfontein Celtic held the University of Johannesburg to a disappointing 1-1 draw at the UJ campus in Soweto at the weekend. All 14 teams in the league will play two matches at home and away and at the end of the season, the team with the most points will win the league title.

There is an air of optimism for Tshwane University of Technology ahead of the start of their Safa Sasol Women's League 2021 campaign.
Sport
8 months ago

Banyana Banyana coach Desiree Ellis desires to get stronger opponents in the next Fifa week after cruising in recent friendlies against Zambia and ...
Sport
9 months ago
Next Article