My strict mom is now my No 1 fan – Holweni 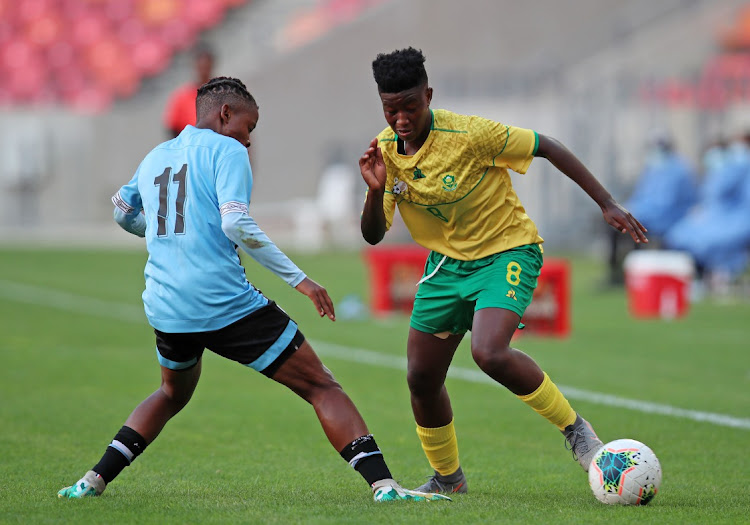 Banyana's Sibulele Cecilia Holweni, seen here dribbling Lone Gaofetoge of Botswana during the Cosafa final, had to dribble past her mom to play the game.
Image: Muzi Ntombela/BackpagePix

As a child, Banyana Banyana budding star Sibulele Holweni had to dribble her mother Miranda with lies in order to get permission to play football.

Holweni is the talk of the town, thanks to her exploits that propelled Banyana to the Cosafa Cup glory in her hometown of Kwazakhele near Port Elizabeth last Saturday.

The 19-year-old's eight goals in this regional tournament saw her clinch the Golden Boot. Five of the eight goals Holweni netted came in one match, a 7-0 win over Comoros in the pool phase.

Growing up, Holweni's  mother did not want her to play football, believing the beautiful game was strictly for boys. The University of Western Cape (UWC) Ladies ace had to resort to lies to be allowed to play football.

She [mom Miranda] is so supportive. But at first she was not happy to see me playing football, especially on Sunday because she wanted me to go to church instead. She had that thing that football is for boys only,’’ Holweni told Sowetan.

“Sometimes I had to lie to her and say we’re playing a final or a crucial game in order for her to be convinced that I must go. I’d promise her that I will come back with a trophy or something.’’

The former SA under-17 skipper would end up arriving late at matches, having had to fulfil her mom’s wish to be at church first.

Plans are underway to ensure that Bafana Bafana and Banyana Banyana players are paid the same amount for representing the country on the ...
Sport
1 year ago

“As time went by, I had to start at church before going to Sunday games. Even my coaches understood that on Sunday I’d arrive late because I’d start at church. It was either that or I don’t come at all. But now she’s so happy for me,’’ Holweni, the fourth born of five children at her home, said.

The reigning Cosafa Cup top-scorer is looking up to her seniors in the likes of Linda Motlhalo, Thembi Kgatlana and Janine van Wyk, aiming to follow in their footsteps and earn an overseas switch.

“It’s encouraging to see most of Banyana girls getting teams overseas. It’s been my dream playing overseas and my goal hasn’t changed. Seeing the likes of Linda, Thembi and Janine making their mark overseas is amazing and motivating,’’ said Holweni.

Holweni is also doing her maiden year of a higher certificate in economic development at UWC. Juggling football and education isn’t a child’s play, Holweni agreed.

“It’s actually not easy to juggle school and football. I have been balancing up the two since 2016 when I was still at HPC [High Performance Centre in Pretoria]. Sometimes you've to go to camp, while you have assignments. So it’s daunting but doable,’’ Holweni said.

Producing splendid performances at Wolfson Stadium, a venue where she played at as a child, got Holweni nostalgic. “Wolfson Stadium is by my home. It’s the first stadium that I started playing at when I was growing up, so it was special to come back with Banyana and score those goals.’’

Bafana Bafana coach Molefi Ntseki is hoping to have all hands on deck as he looks to shore up his defence for the next 2022 Africa Cup of Nations ...
Sport
1 year ago
Next Article