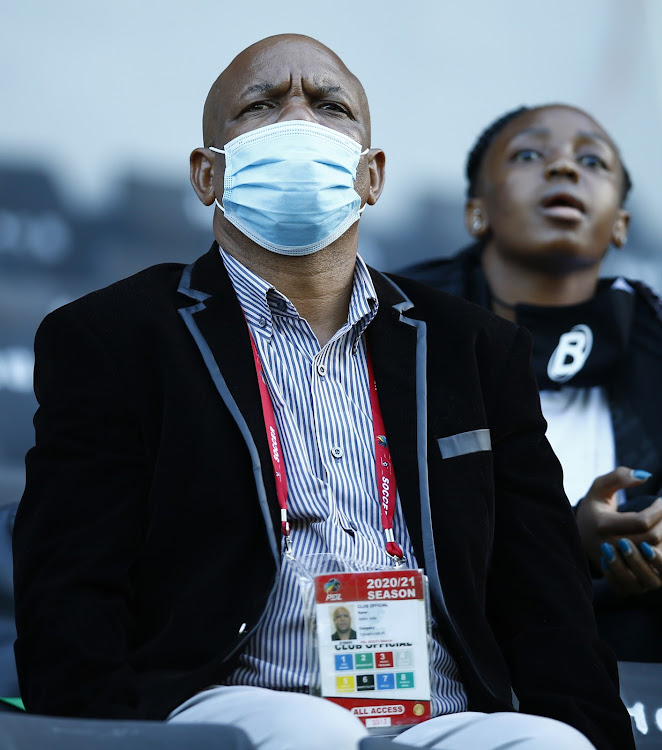 Tshakhuma FC chairman Abram Sello watches on from the stands during a Premiership match in Durban.
Image: Steve Haag/BackpagePix

Tshakhuma Tsha Madzivhandila (TTM) chairman Abram Sello has decided to give the entire Nedbank Cup R7m winnings to his players‚ staff and other members of the team.

TTM narrowly beat Chippa United 1-0 in an exciting Cup final in Bloemfontein on Saturday night to win a first-ever major trophy for the club.

They also booked a place in next season’s Caf Confederations Cup in the process.

A committee has been appointed to work out how the money is to be split among the club's employees.

“I am going to take the whole amount of R7m and give it to all the structures of the club‚ starting with the cleaners‚” said Sello.

“Everyone worked hard for this and it was not only the players.

"All the structures in the club must be able to get something so that they are motivated as we move on.

"My culture as a leader and businessman is always to motivate people that I work with because that makes sure they work to their maximum potential and achieve maximum results.

“We spoke about this issue of a bonus before the final and I told them to wait until we get the trophy and the cheque.

"Promises were [made and we said] when we win the tournament things are going to be like this or like that.

"I said everyone who contributed during the tournament will get a bonus if we win and they are going to get it now that we have won the trophy.”

Sello said the bonuses will go a long way in motivating players as they are still involved in a tough relegation scrap with Stellenbosch‚ Maritzburg United‚ Chippa and Black Leopards.

“Players‚ technical team‚ office bearers‚ cleaners and everybody will get their share.

"As the chairman of the club I am declaring the whole amount to people who participated to our success.

"We are still fighting in the league for safety and we are going to play in the Caf Confederation Cup next season.

"This will go a long way in motivating everybody because it is not going to be easy.

“The bonus is subject to whatever costs we may have incurred along the way to the final but the committee will come up with recommendations of how the money will be split.

"But it is going to be shared among people who are working in the structures of the club.

"I know what the players asked and the committee will definitely deal with those issues.”