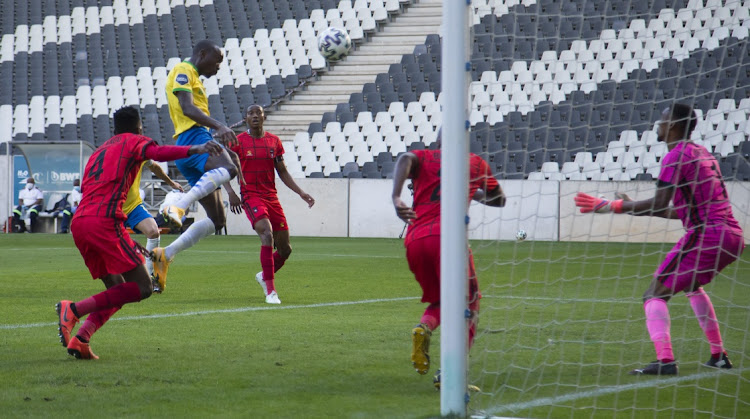 The success in Nelspruit put Downs on 57 points and six more points will take them to 63, while second-placed AmaZulu can reach 62 points at most. Peter Shalulile netted the decisive strike, his 11th in the league this term inside 20 minutes. As things stand, only a miracle can hinder Downs from winning the title.

Andile Jali and Rivaldo Coetzee in the middle of the park enabled the Brazilians to control the match by winning most of the second balls better than their Galaxy counterparts in Mlungisi Mbunjana and Bathusi Aubaas. Downs also had goalkeeper Kennedy Mweene to thank for the win.

The Zambian-born Mweene saved Lindokuhle Mbatha’s spot-kick in the first stanza. Mosa Lebusa handled the ball inside the box, leaving the referee with no choice but to award a penalty to the hosts. Downs players didn’t even protest the decision. In the second half, Downs just showed experience, protecting their lead by knocking the ball around patiently.

After being stretchered off early in the first half of their 2-0 home win over Maritzburg United last Wednesday, influential attacker Themba Zwane couldn’t make the match day squad yesterday. Zwane’s absence saw prodigy Promise Mkhuma, who had replaced him against Maritzburg, take to the field. Khuliso Mudau also got a rare nod to start at right-back position, a slot Thapelo Morena has made his own at Chloorkop.

The Rockets also made some modifications from the XI that beat Cape Town City 1-0 in their previous league outing last Saturday. The notable change was that of Marlon Heugh, who started in goal in the absence of injured Wensten van der Linde. Mxolisi Macuphu, who starred on the bench against City, spearheaded Galaxy’s attack ahead of Wayde Lekay, who’d started against the Citizens.

After their promising start to MultiChoice Diski Challenge, Mamelodi Sundowns are on the verge of losing three games in a row.
Sport
1 year ago

Mamelodi Sundowns have a chance to open up a seven-point gap at the top of the DStv Premiership table when they meet TS Galaxy at Mbombela Stadium on ...
Sport
1 year ago

Attempts by former Kaizer Chiefs and Mamelodi Sundowns star George Lebese to resurrect his career at Tshakhuma Tsha Madzivhandila (TTM) have hit a ...
Sport
1 year ago
Next Article