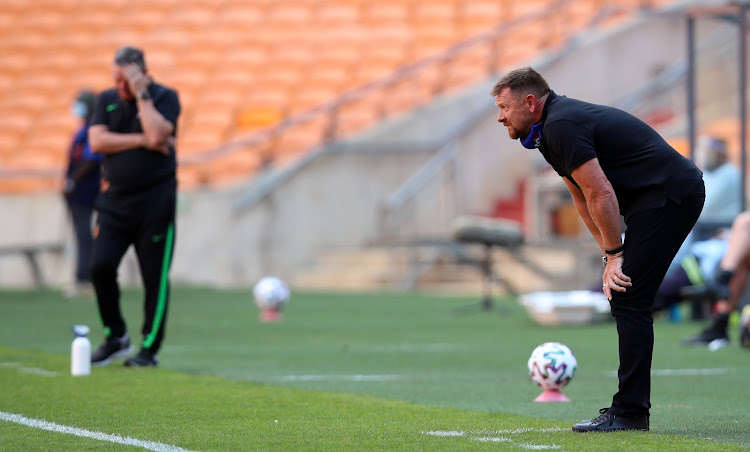 Coach Eric Tinkler has a difficult task on his hands to motivate his squad.
Image: Muzi Ntombela/BackpagePix

Four matches played in all competitions and four defeats after all of them.

These are the grim facts facing Maritzburg United in a difficult start to the season that is a far cry from the heady days of the previous campaign when coach Eric Tinkler’s side finished seventh on the standings.

While these are difficult times in the KwaZulu-Natal city‚ Martizburg's astute coach Tinkler is not pushing the panic buttons just yet.

The coach said once he's managed to restore morale‚ better results will come for the Team of Choice.

Maritzburg appeared to be on the verge of turning things around when they took a 1-0 lead away to Chippa United in Port Elizabeth last Tuesday‚ but after conceding two penalties and the last goal in open play‚ they eventually lost the game 3-1 with striker Eva Nga registering the first hat trick of the season.

“I thought the first half (which ended 1-1) wasn’t a bad performance at all‚” Tinkler reflected.

“I thought we controlled the match to a degree and we were a little unfortunate with the penalty in my opinion.

"I think they only got into our box three times versus what we managed to do in the first half.

“Good goal (by Daylon Claasen) and I think we created another three or four fantastic opportunities to extend the lead.

“So at half time we spoke about what tactically they were doing in terms of the numbers forward.

"They always left four players upfront‚ the importance of dealing with the second ball‚ and when we were on the ball we tended to panic.

“We need to recognize that there was a lot of time and space that we could have used better going forward.

“And we concede the second… another penalty‚ ja‚ it’s difficult. You concede another penalty and then we had a red card (Sibusiso Hlubi) and when you’re down to 10-man you’re chasing.”

Maritzburg still have to find a solid goalkeeper to replace Richard Ofori after his departure to Orlando Pirates in the beginning of the season.

But Tinkler remained confident that his team would turn the corner soon. That match will come after the Fifa week on November 21‚ which gives Tinkler more than two weeks to correct the many shortcomings he can see in his side.

“The boys tried hard and I can see. The confidence and the morale is very‚ very low (after the defeats). And again for me it’s similar to what happened in the Chiefs (they lost 2-1 after leading) game. Tale of two halves… first half very‚ very good and second half we drop off.”

“That’s a little bit disappointing but as I said‚ the confidence and moral is what we’ve got to work on and that’s not going to be easy."