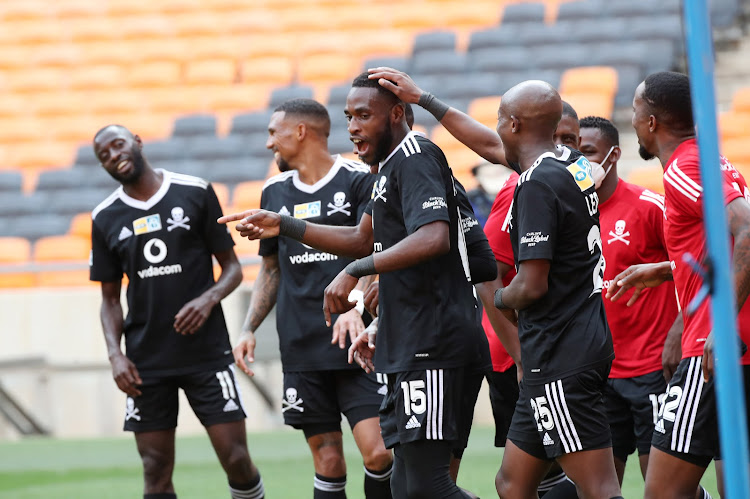 Fortune Makaringe celebrates with teammates after scoring the opening goal of the match.
Image: Gavin Barker/BackpagePix

The torment continued for Kaizer Chiefs after rivals Orlando Pirates finally put them out of their misery and ended their participation in the MTN8 at FNB Stadium on Sunday afternoon.

Second half goals from Fortune Makaringe and Linda Mntambo were enough for Pirates to win this semi-final second leg encounter comfortably on a blistering hot afternoon in Johannesburg.

Sunday afternoon's result also means that Pirates won the two-legged tie 5-0 on aggregate after the visitors won the first leg 3-0 in Orlando a week ago.

The final score could have been a lot more embarrassing had Pirates‚ Mntambo in particular‚ been more ruthless in front of goal and punished Chiefs goalkeeper Daniel Akpeyi.

Pirates coach Josef Zinnbauer returned from Germany on Sunday morning and was happy to watch his charges book their place in the final with a comfortable display against their bitter rivals.

The German mentor left the country immediately after the first leg to be with his son Fabio after a horrific accident on Münchener Strasse in Nuremberg that left the 24-year-old in a critical condition on October 23.

Chiefs coach Gavin Hunt had a resigned look about him and conceded that the result was a fair reflection of the semifinal over the two legs.

"I think it [the result] is a true reflection‚ you know‚ and something that we have to knuckle down‚ work harder and do the other part of the game which we are not doing.

"You know there is another part of the game we are not doing and it is because of a lot of things‚ but we have got to try and get that right‚" Hunt said.

It was always going to be a difficult afternoon for the limping Chiefs side and while some of their die-hard fans continued to believe that the club could mount an unlikely comeback at FNB Stadium from 0-3 down‚ the reality is it was a huge mountain to climb.

Hunt will draw solace from his charges' performance in the first half when they dominated the better part of the proceedings and put Pirates under pressure.

But just as they did in the first leg‚ Chiefs could not find that missing killer blow and in the end Pirates were able to deliver the sucker punch that took the fight out of their Soweto rivals.

Pirates will now face Bloemfontein Celtic in the final in a match between two sides that have not won this trophy in many moons.

The Bucs last won the MTN8 in 2011 while Celtic have not been champions of this competition since 2005 when it was known as the SAA Supa 8 under previous sponsors South African Airways.

Celtic booked their place in this year's final with a 1-0 win over outgoing champions SuperSport United in a second leg semi-final at Dr Petrus Molemela Stadium in Mangaung on Saturday.

The Bloemfontein side advanced 2-1 on aggregate after they played to a 1-1 draw in the first leg at Lucas Moripe Stadium in Atteridgeville a week ago.

Victor Letsoalo’s lone strike in the second-half was enough to guarantee Celtic an appearance in a successive major cup final after their defeat to Mamelodi Sundowns in the Nedbank Cup in September.