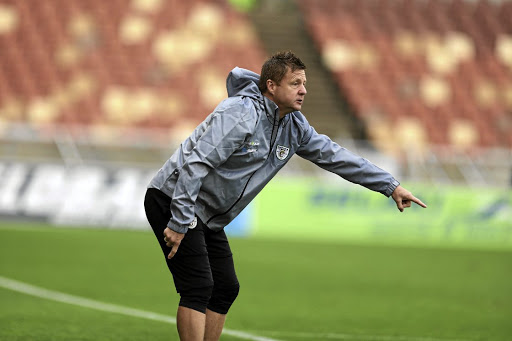 Baroka coach Dylan Kerr would gladly play the semifinal and the final of the Nedbank Cup in one day if it were decided that way.

Games are currently suspended due to the coronavirus crisis and it is unknown how or when the season will be concluded.

Baroka are in the semis of the R7m competition and were drawn at home against Bloemfontein Celtic.

Mamelodi Sundowns take on Bidvest Wits in the other semifinal.

"We used to do double-headers back in the day and the charity cup in SA also used to be semis and a final in a single day," Kerr told Sowetan.

"It used to sell the stadium out but we don't know if fans would be allowed. But I would have no problem doing things that way.

But first we have to overcome this crisis not just here but around the world."

Should Kerr lead Bakgaga to the coveted cup, he looks forward to continue his tradition of getting a tattoo of the club he wins with on his leg.

"That would be an absolute dream if I could get another tattoo. I'd love to guide the club to the cup but that's not on my mind right now," he said.

The Englishman already has tattoos of Kenyan giants Gor Mahia, Reading FC, Leeds United (both England) and Hamilton Academical FC (Scotland) from his triumph with them as a player and a coach.

The 53-year-old will have to wait until the lockdown ends next week and the PSL decides how games will be played.

Kerr said his objective was to save the Limpopo team, who are 13th with 23 points, from relegation.

"If you asked me to choose I would obviously want to get the cup and ensure we survive relegation. It won't be easy but we are willing to put the work in and do whatever it takes."

Keeping players competitive and ready to resume when the coronavirus health scare has passed is the challenge for top-flight coaches while the ...
Sport
2 years ago

Dylan Kerr positive Baroka will stay up after victory

Derby win over Leopards a big plus.
Sport
2 years ago
Next Article