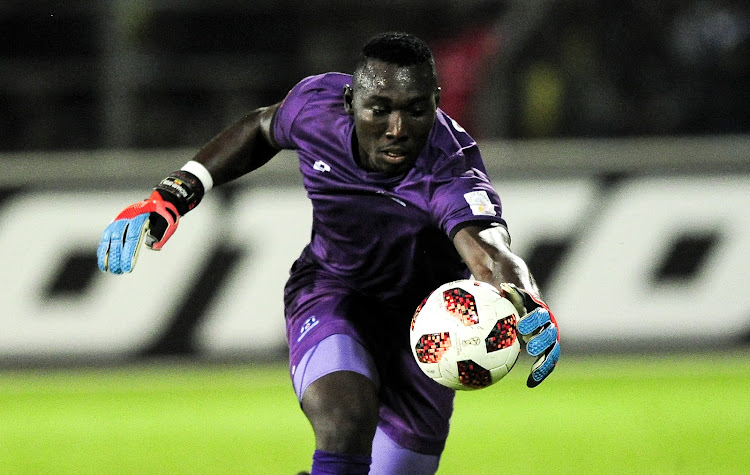 Richard Ofori signed a contract extension with Maritzburg United that will see him with the Team of Choice until the end of June 2021.
Image: Gerhard Duraan/BackpagePix

Maritzburg United’s togetherness and discipline‚ forged in a do-or-die fight to avoid relegation via the playoffs last season‚ had been a large part of their success in a 2019-20 campaign that finds itself in limbo due to the coronavirus‚ goalkeeper Richard Ofori has said.

Ghana No1 Ofori has turned out to be one of United’s coup signings since he joined the team from KwaZulu-Natal capital Pietermaritzburg in 2017.

He has been linked in media reports to a move in the next off-season to Mamelodi Sundowns or Orlando Pirates‚ but United have moved to quash such speculation by clarifying that they exercised a year’s option to June 2021 on Ofori’s contract in January already.

Ofori was part of United’s best season in 2017-18 with a first cup final in the modern era in the Nedbank Cup and fourth-placed Absa Premiership finish under Fadlu Davids.

Coach Eric Tinkler’s rescue mission arriving from January transferred‚ after a slow start of no win in their first five games‚ into what was shaping up as another top season in 2019-20 with a Telkom Knockout final in November‚ and United in fifth place as the league was suspended on March 16.

“It’s the togetherness that has been very important. Because we suffered a lot last season‚” Ofori said of a United combination whose shape‚ organisation and tireless work ethic has made them one of the most difficult teams to beat in 2020.

“So then this season it’s been the togetherness‚ the teamwork and the hard work that has helped the team.

“As you saw‚ we didn’t start very well‚ but I think when the coach talks to us we listen and then we try to do everything possible to make things right.

“In each position there is competition. Each player is working hard‚ and everyone wants to execute the task that the coach gives to him.

“So that’s what has been our strength. Because you know that if they give another player the opportunity he will deliver.

“So you need to push. I think the competition has really helped a lot.”

Another notable factor identified in United’s strong campaign has been their Friday night vibe in home matches at Harry Gwala Stadium‚ which have become an event in the football-mad KwaZulu-Natal midlands.

“Since day one the fans‚ the city as a whole‚ have been there for the team.

"Most of the clubs don’t get the opportunity that Maritzburg United has in terms of a fanbase and the support in the crowd‚” Ofori said.

“It’s quite effective in terms of that Friday night‚ and how we need the support.”