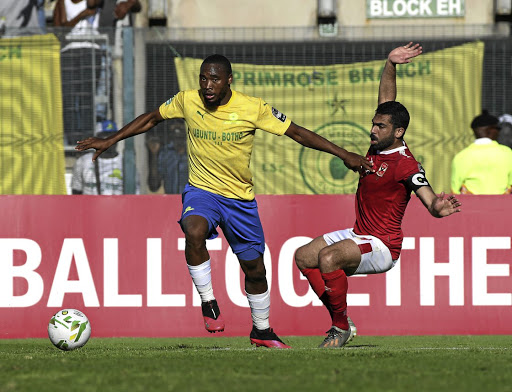 They were humbled in the CAF Champions League quarterfinal by Al-Ahly, and have been on the back-foot for most of this campaign in the Absa Premiership.

Yet Pitso Mosimane reckons Mamelodi Sundowns have improved when compared to last term, where they humiliated the same Ahly, the Egyptian giants, and went on to defend the league title.

"We've made strides this season, we are better than last year," Mosimane maintained, even as his team have not occupied top spot this season and trail leaders Kaizer Chiefs by four points, albeit with a match in hand.

"We have already won a cup (Telkom Knockout). We made the semifinals of the MTN8. We are in the semis of the Nedbank Cup. We are second on the log, four points behind. You may say we have regressed because last year we made the semifinals of the Champions League. But I look at how we played in the group stages. We went through unbeaten, for the first time. We qualified (for the quarterfinals) with two games to spare."

Mosimane believes Sundowns fell short against Ahly, whom they hammered 5-1 on aggregate in the last eight last year, because of "two terrible mistakes" in the first leg in Cairo, to lose 0-2 and then drew 1-1 in the home leg.

"We didn't have the right type of personnel to fight in Cairo. The Champions League is not like the local league. It's heavy and physical. There's no flowing football there. You're playing in a compressed space. You have to contend with time-wasting and questionable refereeing decisions.

"You don't win because you're good. You have to be physical and intelligent. We didn't have that in the first leg against Ahly," he said.

He is confident that once normality is restored after the coronavirus-induced indefinite break, Sundowns would give Chiefs a decent run in the battle to annex the championship.

"We had the right momentum (before the break). At one point the gap was big, 13 points or something like that, but we managed to bring it down to four points. We had a big game (against Orlando Pirates) before the games were stopped.

"We have to make sure that we win our games because Chiefs also have tough games looming. They have to face (Bidvest) Wits. I heard Thulani Hlatshwayo saying they (Wits) also want to win it. So it's going to be tough for everyone."