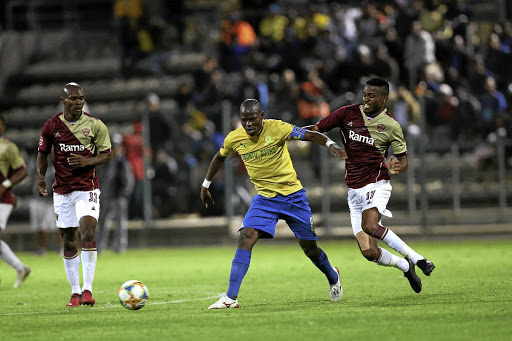 Just a few hours after a confirmation of snatching up George Maluleka from Kaizer Chiefs, Mamelodi Sundowns piled more misery on Amakhosi in the title run-in by beating Stellenbosch 1-0 at Athlone Stadium last night.

It was Themba Zwane's solitary strike very early in the first-half that gifted Sundowns maximum points - narrowing the gap between them and log leaders Chiefs to four points with a game in hand. The Brazilians are now on 44 points from 21 games.

Earlier on yesterday, Chiefs confirmed Maluleka will be joining Downs at the end of the season after penning a pre-contract. Many questioned the timing of revealing such news amid the title run-in.

Owing to the vexatious case of loadshedding across the country, the venue's floodlights weren't fully functional . However, this never affected the proceedings in any way.

While Sundowns kept all their usual suspects in the starting XI, Stellenbosch made a wholesale changes to the line-up that was thumped 3-0 by Maritzburg United in their last outing on Friday.

Midfielder George Maluleka has signed a pre-contract to join Mamelodi Sundowns in the off-season‚ Kaizer Chiefs have announced.
Sport
2 years ago

Surprisingly, Stellies started the game without any natural striker, with their leading target men in Iqraam Rayners, Ryan Moon and Waseem Isaacs all on the bench.

In the absence of a recognised centre-forward, speedy wingers in Ovidy Karuru and Ashely du Preez were deployed upfront for the hosts. Using their blistering speed, the pair unsettled the Downs rearguard inside the first minutes of the match.

Despite Stellenbosch's early supremacy, it was Sundowns who broke the deadlock, against the run of play, when Siphelele Mkhulise and Sibusiso Vilakazi played a brilliant one-twos, before the latter teed up Zwane to net his ninth league goal of the campaign in the ninth minute.

After the goal, the Brazilians stepped up a gear and controlled the game, especially with Andile Jali bossing the midfield. Downs next face Highlands Park in the Nedbank Cup quarterfinals at Makhulong Stadium (6pm).

Stellies will only return to action on March 22, traveling to Golden Arrows for a league tie.