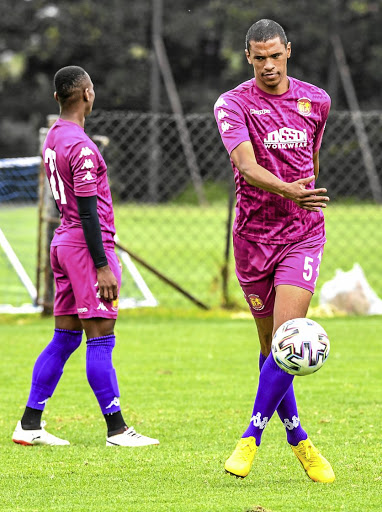 Highlands Park defender Bevan Fransman thinks forcing their Nedbank Cup quarterfinal clash against Mamelodi Sundowns to extra-time can put them in a favourable position to triumph.

Speaking to the media before their training session at Balfour Sports Ground in Johannesburg yesterday, Fransman fell short of revealing their game-plan for was centred on attempting to drive Sundowns to extra-time.

"The main thing is to play with no fear. Most definitely [that going into extra-time would give them an edge]," said the free-spirited 36-year-old Fransman.

"The longer we frustrate them [Sundowns] the better, they would not want to be on the pitch at Makhulong for 120 minutes."

On the other hand, Fransman expects the Brazilians to fight harder to avoid extra-time, with their crucial league match against Orlando Pirates coming up three days later, followed by a return to Makhulong the following Saturday for a league tie.

"They are facing us back-to-back. [Playing] 120 minutes and the following week they have to come back again and in between there is Pirates, so there's a lot to think about for them," said Fransman.

However, the Lions of the North centre-back is aware Downs can manage their squad amid busy schedule quite brilliant.

"They've had heavy schedule. But in the past, they have dealt with it fairly well; they rotated players, given players some rest in certain games. brought off guys early when the results were going their way."

The seasoned centre-back, who reached the Nedbank Cup final with Maritzburg United, but lost to Free State Stars in 2018, has tipped four of his teammates in Peter Shalulile, Mothobi Mvala, Lindokuhle Mbatha and Luckyboy Mokoena to shine brightest versus Sundowns.

"We've got our regulars, Mbatha pops up all the time, creating things for us. Peter, Mothobi and from the right side Luckyboy has got massive quality with his delivery."