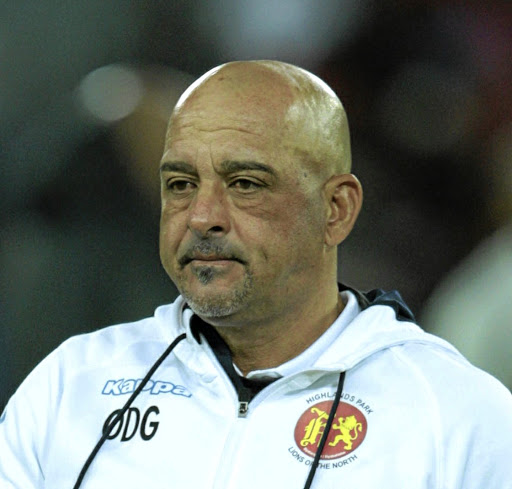 Peeved Highlands Park coach Owen Da Gama was left guessing as to what will happen when his side host Mamelodi Sundowns in the quarterfinal of the Nedbank Cup on Saturday after their dizzy performance at Makhulong Stadium against SuperSport United on Sunday.

"Your guess is as good as mine. I mean, there is nothing to take from this game to our next against Sundowns because there are no positives," an upset Da Gama said ahead of their clash against the Brazilians.

"Four to five players just did not come to the party against SuperSport."

Da Gama was angry after his team went down 0-2 to Matsatsantsa a Pitori in the Absa Premiership fixture.

"Some players approached the game with an amateur attitude. You play so well against Kaizer Chiefs [won 5-4 on penalties in the last 32 of the Nedbank Cup two weeks ago] and Golden Arrows [1-1 draw in an away league match] and you think you have arrived," said Da Gama.

Highlands Park top striker Peter Shalulile cannot thank club coach Owen da Gama enough for believing in him when the chips were down during his ...
Sport
2 years ago

He would not want to name and shame the players that did not come to the party on Sunday.

"They know who they are and they must improve because if they don't, then there will serious problems.

"There are players that are coachable and there are some that are not coachable, yet they think they have arrived," he said.

"There was no hunger and no fighting spirit. We never came to the party. We have to become more professional. I'm totally disappointed."

He said playing against Sundowns this weekend was an opportunity for his team to grow character.

"We will be ready to face Sundowns," Da Gama said.