Wayne Arendse not fussed about his cameo role 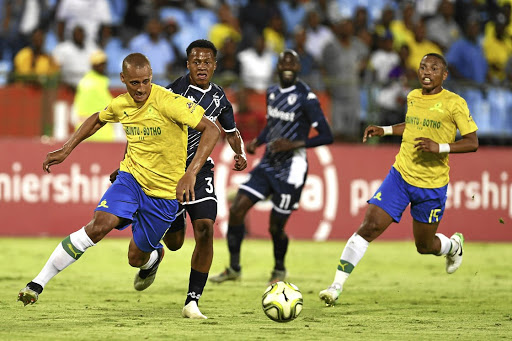 Mamelodi Sundowns defender Wayne Arendse has embraced his bit-part role this season, with Motjeka Madisha and Mosa Lebusa usually preferred ahead of him.

What could further limit Arendse's role is the return of another hard-nosed defender, Ricardo Nascimento, who won the Defender of the Season gong last term.

The Brazilian centre-back has just recovered from a groin injury he had sustained at the end of last season and has played in the last two games against Petro and Wydad Casablanca.

Arendse, 35, has started only five of Sundowns' 18 league outings, making one appearance from the bench. However, the limited game time isn't troubling the lad from Cape Town.

"Obviously, I haven't been playing as much as I'd like to. The coach [Pitso Mosimane], when he rotates, he feels who needs to play certain games. But I am very happy to contribute even if I am coming from the bench," Arendse told Sowetan. "When he [Mosimane] calls me, I am always ready to play. We have a lot of players and there'll be suspensions and injuries.

"You just need to be ready while you are supporting the ones who are playing because it's all about the team."

The former Santos stalwart feels Madisha is a strong contender for the Defender of the Season award. "He's doing well and I would put him up there for the award. The boy is consistent; he scored some crucial goals in the Champions League. Actually, he's doing everything right."

As most teams use the Nedbank Cup to give their fringe players a run, Arendse could feature when Sundowns host cross-town rivals SuperSport United in the Ke Yona competition's first round at Loftus Versfeld on Saturday (8.15pm).

"We want to win every competition we participate in. With the squad we have, I believe we can manage to also give our best in the Nedbank Cup as we are also vying for the Champions League and the domestic league title."

The emergence of hugely improved defender Motjeka Madisha is a healthy poser for Bafana Bafana coach Molefi Ntseki according to Mamelodi Sundowns ...
Sport
2 years ago

Sundowns grappling with injuries ahead of tricky date against rivals Wits

Mamelodi Sundowns are grappling with an injury crisis ahead of a crucial Absa Premiership encounter against title rivals Bidvest Wits at the Loftus ...
Sport
2 years ago

Sundowns coach Pitso Mosimane: 'We are training on Christmas Day'

While most Premiership players will be enjoying some downtime with the families on Christmas Day, Mamelodi Sundowns will be hard at work in Algiers ...
Sport
2 years ago
Next Article