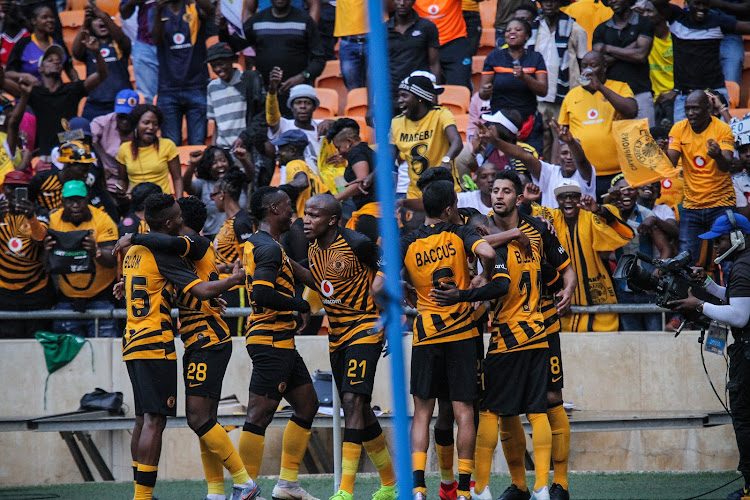 Leonardo Castro celebrates with his Kaizer Chiefs after scoring his third goal of the match.
Image: BackpagePix

Never read too much into a friendly. And yet, a scoreline as dramatic as Kaizer Chiefs’ 4-2 thrashing of Mamelodi Sundowns in Saturday’s Shell Helix Ultra Cup at FNB Stadium cannot be quite so easily dismissed as insignificant.

Leonardo Castro – barely seen in an Amakhosi jersey this season – notched his hat trick in the ninth and 31st minutes, the Colombian centre-forward’s  third added a minute into injury time.

All three goals were laid on by Castro’s ex-Downs, now Chiefs, strike partner Khama Billiat, who added a fourth of his own two minutes into added time.

Substitute Ali Meza pulled one back for Sundowns in the 60th. As soft penalty scored by another Downs replacement, Gaston Sirino, deep in injury time made for a scoreline in defeat that flattered the Brazilians.

Chiefs’ senior team – many of them on international duty this weekend – are top of the log in serious football in the Absa Premiership. In friendly football their second-stringers are dishing up impressive performances against Pitso Mosimane’s league champions – albeit, of course, also a Downs B team.

Could something crazy be happening for the eccentric Ernst Middendorp and his seemingly charged-up charges at Naturena?

With the way their respective fortunes have gone the past few seasons, you would expect Sundowns to have more depth any day than Chiefs.

Downs probably had a few more players on international duty than Chiefs did.

Still, this friendly did seem to continue to indicate that, as Amakhosi coach Middendorp has started to beat his team into a better shape, Chiefs actually have some exciting players on the fringes of their first team. Dare one say it, perhaps even some depth.

Something else displayed on Saturday was that the Billiat-Castro partnership, and their mesmeric understanding, has perhaps been underutilised this season.

Middendorp has understandably given new signing Samir Nurkovic game time, but Castro has barely been seen. There has been speculation of a personality clash with Billiat, who might have featured more too.

This is where Middendorp can seemingly allow his ego to get the better of him, and it can lead in the long-term to dressing room rebellions.

Given a run together, Castro-Billiat put in a first-half masterclass. Billiat laid on the three for his ex-Downs team-mate, then scored a fourth, for an improbable 4-0 lead at the break to Amakhosi.

Billiat shrugged off the challenge of Wayne Arendse and rolled an attempted finish onto the upright, Castro striking in the rebound.  Downs were flat-footed again as Billiat was down the right to force a save from Reyaad Pieterse, Castro sweeping the loose ball in.

Mosimane brought on some big guns for Downs’ second-half fightback. Two combined for a goal pulled back, Gaston Sirino’s low cross palmed by Daniel Akpeyi for Ali Meza to finish into an open goal.

Even after that, though, Chiefs had their chances to extend their lead again.

Sirino pulled another back after what seemed a softly-awarded penalty deep in injury time, after Lyle Lakay went down in the box.

Stellenbosch FC have moved their prestige home match against Orlando Pirates at the end of the month to Cape Town Stadium‚ which means a weekend ...
Sport
2 years ago

Maritzburg United and Bidvest Wits will kick off the Telkom Knockout last-16 round of fixtures on Friday‚ October 18 at Harry Gwala Stadium in ...
Sport
2 years ago

With next month's Under-23 Africa Cup of Nations (Afcon) in Egypt falling outside the Fifa calendar, SA coach David Notoane is prepared for any ...
Sport
2 years ago
Next Article