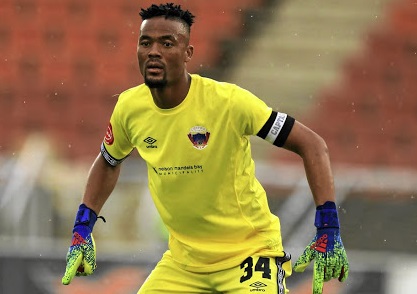 A cloudy day is no match for a sunny disposition.

This saying aptly sums up how Chippa United goalkeeper Veli Mothwa has managed to resurrect his career after three years of absence in elite football, having been the subject of a thug-of-war between Baroka and Polokwane City in 2014.

Five years ago, Mothwa was found guilty of simultaneously signing contracts with Bakgaga and Polokwane. The 28-year-old shot-stopper was fined R50,000 at the time.

Fast forward to this season, Mothwa is now the Chilli Boys' skipper and the first-choice keeper after ousting veteran Patrick Tignyemb from both roles, following the Cameroonian's mediocre display at the start of the term.

"It was difficult, watching people enjoying football at the highest level when you're playing for the reserves. I was so patient and working hard," said Mothwa, who prior to making his Chippa debut late last year, had not played top-flight football since March 2016 at Baroka.

Chippa United took themselves out of the relegation zone for the first time this season as they upset hosts Cape Town City as Nigerian striker ...
Sport
1 year ago

"My attitude helped me stay focused. I knew that I will eventually get my chance if I give my all at training and I showed dedication. There's no permanent hardship in life, it depends on you as an individual. how you choose to deal with your problems."

Mothwa still feels indebted to the East London-based outfit, especially their chairman Siviwe "Chippa" Mpengesi for standing by him and helping him settle his fine with the Premier Soccer League.

"Chippa have done a lot for me, especially the chairman. He always knew that I was not lying when I said I never signed with Polokwane City [though he was found guilty, he maintains he was innocent].

He attended all my hearings at the DC, showing support," the keeper stated.

"As I cannot repay Chippa in money, it's very important for me to always perform well so that they will see that I am appreciating all they've done for me over the years when I was struggling."

Chippa United goalkeeper Veli Mothwa has made a return to Premier Soccer League action for the first time in three years and his introduction has ...
Sport
1 year ago

Bidvest Wits put in a disciplined performance to do what they needed to beating Chippa United 1-0 in Tuesday night’s Premier Soccer League match at ...
Sport
4 years ago
Next Article