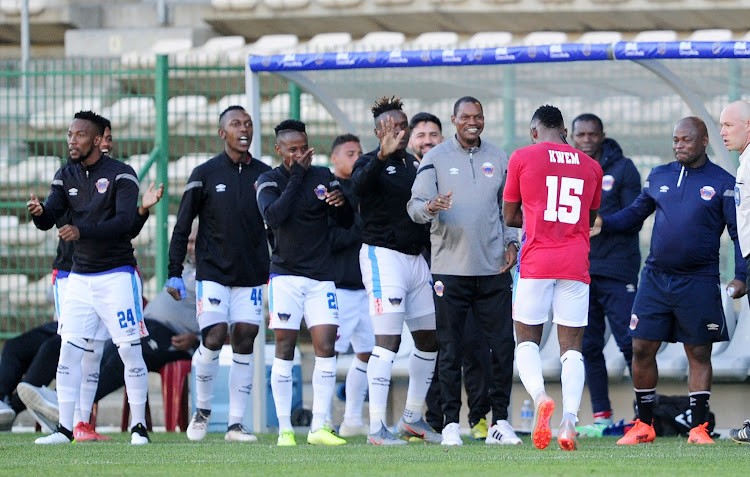 Augustine Kwem of Chippa United celebrates his goal with the bench during the Absa Premiership 2019/20 game between Cape Town City and Chippa United at Athlone Stadium in Cape Town on 7 December 2019.
Image: © Ryan Wilkisky/BackpagePix

Chippa United took themselves out of the relegation zone for the first time this season as they upset hosts Cape Town City as Nigerian striker Augustine Kwem scored the winner in an upset 1-0 result at Athlone Stadium on Saturday night.

City’s poor campaign continued as new coach Jan Olde Riekerink is still without a victory and a goal after three games in charge and does not look to be the immediate answer for the beleaguered club.

Kwem’s first half goal came as City dominated play but Chippa showed maturity and organisation to move to 14 points, leap frogging above City, who are now four places from b bottom.

The home side came out of the starting blocks looking like world beaters as they pushed the ball around with ease, showing skills, pace and deft touches to leave Chippa looking bewildered.

But there was enough in the defensive organisation of the Port Elizabeth-outfit to deny City a chance to use all that possession and turn it into goals, holding on grimly in the beginning.

It was inevitable that all the pressing and hurrying without any results would taper off and so it proved as Chippa rode out the early storm find their way back into game.

Ex-Orlando Pirates midfielder Meshack Maphangule showed his class as he began to break down the City’s attacks and also set Chippa off on chances of their own.

And after 22 minutes they were in the lead, as the ball went out wide to William Thwala, inside to Thabo Rakhale who eliminated two defenders with his pass and then up to Kwem, who turned cleverly and then slipped it into the net.

It left the hosts looking shell shocked and although Tareeq Fielies might have equalised soon thereafter with a back post header, they were effectively tied up in the middle as Maphangule and Xolaniu Mahola in the midfield kept disrupting and the back four held their line to leave City looking frustrated and, frankly, clueless.

Chippa’s winger Silas Maziya rattled the City crossbar on the stroke of half-time as they had a chance to go 2-0 up.

A double change at half-time suggested a touch of desperation on the part of the new coach with Chris David and Fagrie Lakay helping to continue domination of possession and look to create but without the desired effect.

City had more efforts on goal in the second half but they were all from outside the opposing penalty box as the Chippa defence held firm.

Mark Mayembela finally got through with some 10 minutes left but even then Veli Mothwa made a save to deny him, as he did two minutes to stop David’s curling shot.