The Beast takes Hall of Fame snub graciously on the chin 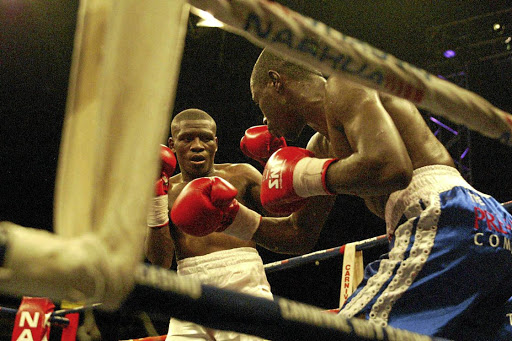 Vuyani Bungu in action against Takalani Ndlovu at Carnival City in 2004./Raymond Preston

The nomination of South Africa's iconic former world boxing champion Vuyani "The Beast" Bungu for the induction to the International Boxing Hall of Fame (IBHF) has become the nomination to the hall of shame.

It has turned out that Bungu - who holds the record of being the only SA boxer to defend his world title, the IBF junior featherweight title, 13 times - did not make the cut to the voting stages which took place in December.

But the 52-year-old Bungu took the loss graciously on the chin. "What is important is that I was nominated for the induction and for me that is a big achievement, especially basing it on the fact that I was the only African fighter on the list for 2020," said Bungu yesterday.

"This shows to me that something positive is happening for the continent. There is hope for a brighter future."

Bungu took the opportunity to pay his last respect to another boxing icon - Peter "Terror" Mathebula - who passed away last weekend and will be buried on Saturday.

Sports Minister Nathi Mthethwa has sent his condolences to the family of legendary boxer Peter ‘Terror’ Mathebula.
Sport
2 years ago

"What a pity Bra Terror will be buried this weekend where I have got other commitments. I wanted to attend his funeral but may his soul rest in peace," said the Mdantsane-based Bungu, who won more King Korn/Boxing World awards than any other fighter in SA.

Bungu's record 13 defences eclipsed the 12 defences made by Brian Mitchell, who defended his WBA junior lightweight belt outside South Africa.

Mitchell was inducted to the IBHF in 2009.

It has been reported that members of the Boxing Writers Association of America and an International panel of boxing historians were responsible for the casting of votes this year.